'Without the constitution we're a mob and not a nation' - Malema 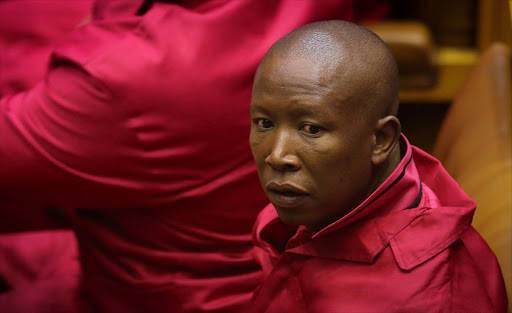 Leader of the Economic Freedom Fighters Julius Malema is pictured ahead of President Jacob Zuma's State of the Nation Address (SONA) to a joint sitting of the National Assembly and the National Council of Provinces in Cape Town, South Africa February 9, 2017. Picture Credit: REUTERS/Sumaya Hisham

“South Africans who’re not happy with us will thank us later. You will thank us for protecting the constitution‚” says Economic Freedom Fighters leader Julius Malema.

The EFF disrupted President Jacob Zuma’s State of the Nation Address last week‚ resulting in the party being violently thrown out of the House. The Democratic Alliance also walked out‚ protesting that Zuma has broken his oath of office.

“Who must abide by the constitution if the President does not abide by it?‚” Malema told a news conference in Johannesburg on Tuesday.

“We are now taking the legal route to ensure that (Speaker) Baleka Mbete be compelled by court to institute impeachment.”

He alleged that police masqueraded as parliamentary security during the SONA disruptions‚ “but we have proof that they were there inside“.

President Jacob Zuma said recently he is not bothered by the spate of insults spat angrily at him across the National Assembly floor before the EFF were ejected from Parliament.

He described the EFF‚ under the leadership of Malema‚ as an “angry minority in the country”.