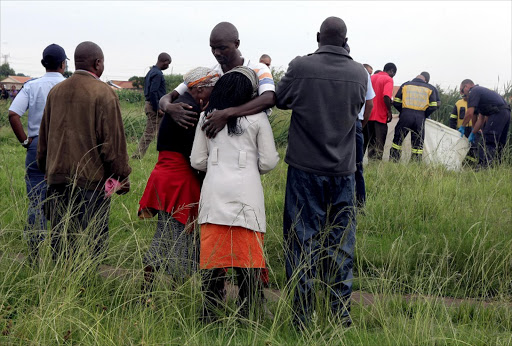 January 2017. Family members, relatives and friends gather near a stream as the search and rescue team recovers the body of Ndivho Malatsi , who was swept away on Monday after heavy rains. The Grade 7 pupil was on her way home from school in Tembisa on the East Rand. Pic: Sandile Ndlovu. © Sowetan

The father of a 13-year-old girl who was swept away by flash floods in Tembisa, East Rand, has blamed himself for her death.

"This would not have happened if I had a stable job. We never slept that night. She was my last born," Hendrick Malatsi said.

Malatsi said he could not afford to pay school transport for Ndivho because he worked odd jobs as a driver. Malatsi broke down as Ndivho's body was recovered from a stream at Winnie Mandela informal settlement's Zone 11.

The Grade 7 pupil was on her way back from school. Her body had been trapped in rubble at the stream.

After her body was recovered, the father moved closer, kneeled on the ground and held her body in his arms. He then cried.

"I wanted to hold her before she left. I loved her very much. I could not sleep without seeing her and I would go and greet her every morning before I go to work or she would come to my room and ask for pocket money," he said.

Police spokesman Captain Mavela Masondo said according to an eyewitness, Ndivho was walking with three schoolmates at about 2.30pm when tragedy struck.

The pupils from Mvelaphanda Primary School were walking on a storm water drain when the girl was swept away.

"An eyewitness who was walking behind the group said the water was too strong," Masondo said. "He said the girl was walking in front while her schoolmates were walking behind her. When she got swept away, the boys ran in different directions. The man then alerted the police about the incident," he said.

Masondo said a search and rescue team looked for the girl on Monday to no avail. The search was called off when it became dark. The search continued again yesterday morning when the body was recovered about 3km from the scene.

Malatsi said: "I normally fetch her from school when it rains but I was still far when the rain began. Her stepmother called me at around 3.30pm and told me that she had not returned from school.

"I told her to send her siblings to go and inquire about her at school, where the principal informed them that there was a child who was swept away but he did not know if it was my daughter," he said.

Malatsi said he went out with his friend to search for her.

"The water levels were still high. We searched until 11pm. Today (yesterday) I woke up at 5am and went on to search for her with my brother and friends. I searched at storm water drains and found her left shoe at one of the drains at about 6am."

Malatsi said he went out and bought torches for the search.

He said after searching for about 2km he was informed that the search and rescue team ahead of him had found the body.

He has four children with his wife, who also works odd jobs at hair salons.

The girl's principal at Mvelaphanda, Thomas Mathavha, described her as a "sweet girl".

"She was an obedient child. I would sometimes give her a lift home when she left the school late because of sports activities.

"She participated in athletics and she played ladies soccer. I loved that girl," he lamented.