We will build the border wall now, announces Trump 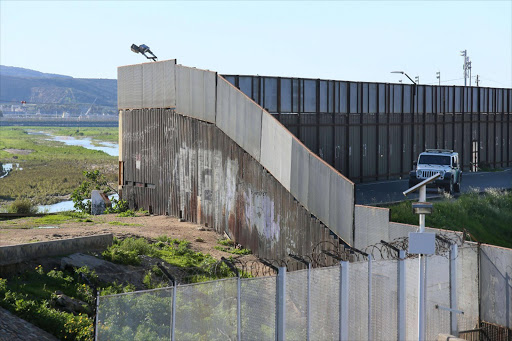 A Border Patrol vehicle sits along the U.S.-Mexico border wall on January 25, 2017 in San Ysidro, California. U.S. President Donald Trump issued an executive order to begin the process of building a wall along the U.S.-Mexico border and is expected to sign an executive order that would suspend the United States' broader refugee program for 125 days. Sandy Huffaker/Getty Images

Donald Trump signed an executive order yesterday (Wednesday) to immediately begin the construction of a wall along the border with Mexico to curb illegal immigration.

The president was also considering slashing the number refugees able to shelter in the United States, and suspending visas for citizens from war-torn Syria and other countries in the Middle East and Africa.

Justifying his sweeping crackdowns, Mr Trump, who has long held that immigration is a threat to national security, said that "when it comes to public safety, there is no place for politics".

Mr Trump said during his election campaign that immigrants from Mexico were "rapists" and "drug dealers".

In announcing the construction of the border wall, he promised his policies would "save thousands of lives, millions of jobs and billions of dollars".

"A nation without borders is not a nation," said Mr Trump, speaking from the department of homeland security. "From today, the United States gets back control of its borders."

The president also yesterday signed a directive to crack down on "sanctuary cities" - areas where police are not required to use their resources to seek out illegal immigrants.

America is home to 11 million undocumented immigrants, according to recent studies. Many are contributors to the economy, forming a significant part of the American labour market.

The White House plans include stripping cities sheltering undocumented immigrants of government funding, and taking steps to force to countries of origin accept the return of illegal immigrants who commit criminal acts.

"We are going to get the bad ones out," Mr Trump said yesterday.

But the administration may face legal challenges, given that some federal courts have found that illegal immigrants cannot be denied bail based only a request from immigration authorities.

Mr Trump is expected to limit the number of refugees admitted to the US to 50,000 a year, down from 100,000, and to impose a temporary ban on most refugees. The new administration is also considering denying visits to the US by people from several Muslim-majority countries, including Syria, Sudan, Somalia, Iraq, Iran, Libya and Yemen.

James Carafano, who led the homeland security portfolio in Mr Trump's presidential transition team, told The Daily Telegraph that the restrictions were designed to "stem the flow" of foreign jihadists to the United States.

The vetting of Syrian refugees is already a process that can last up to two years, and experts have said there is no evidence that extremists have sought to use the mechanism to enter the US. "To use world events as an excuse to keep people from coming to the US who are literally fleeing for their lives disrespects the history of this country," said David Leopold, an immigration lawyer.

An executive order drafted for Mr Trump to sign calls for officials to produce a plan for safe areas for refugees inside of Syria and other countries, according to a document seen by Reuters.

"The Secretary of State, in conjunction with the Secretary of Defence, is directed within 90 days to produce a plan to provide safe areas in Syria and in the surrounding region in which Syrian nationals displaced from their homeland can await firm settlement, such as repatriation or potential third-country resettlement," the draft order says.

Funding barrier US has spent 7bn on first stretch

Donald Trump's proposed wall on the Mexican border is a massive undertaking.

The US has already spent about 7?billion constructing barriers on a 600-mile stretch of the border, but that cover only about one-third of the land border, which stretches from California to Texas.

Mr Trump wants to upgrade the fencing currently in place and build a "great wall", upwards of 40 feet in height and reaching underground to prevent tunnelling.

There is a 2006 law on the books, signed by George W Bush, authorising a "physical barrier" on the border. It was only partially implemented, and there is nothing to stop Mr Trump from carrying it forward so long as he finds the necessary funds - estimated to be between 15 and 25 billion.

US taxpayers will foot the bill in the short term, but Mr Trump maintains that Mexico will reimburse them "in some form".