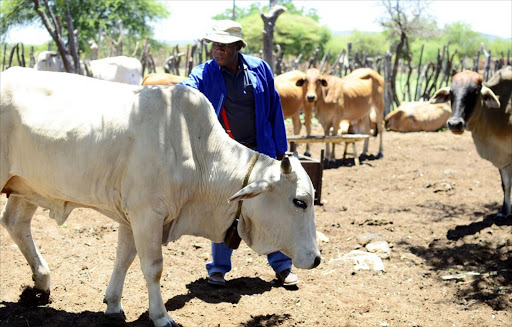 January 17, 2017. Farmer Ramokapono Lucas Ikaneng pointing to one of his stolen and recovered cows at his kraal in Braklaagte, Zeerust. Pic: Tiro Ramatlhatse. © Sowetan

Residents in North West have lost faith in the justice system and decided to create a vigilante group to deal with livestock theft.

The vigilante group of Braklaagte, near Zeerust, is responsible for catching and assaulting suspected thieves. As punishment, the alleged thieves are subjected to a whipping before they are handed over to the tribal council and fined for stealing cattle. If they cannot afford to pay the fine, they are banished from the village.

A resident said they decided to form the group because the law took time to act against the thieves .

Other residents added that they preferred to report stock theft to the tribal council because they got quicker results.

The victim receives the stolen cow back and one that belonged to the suspect. The other cow will be sold and the money shared among members of the neighbourhood watch. The last cow is given to the headmen.

When a thief is caught, the villagers whip him before handing him over to the tribal council, which will call a gathering to prosecute and pass judgment.

If the suspect does not have cows but there is enough evidence that he stole the cow, then he is ordered to leave the village together with his wife and children.

His house and all the belongings inside will then be confiscated by the tribal council, who will later sell the goods in the form of an auction and use the money from it to "develop" the village.

In a hearing yesterday, an alleged thief wrote a letter confessing that he stole a cow and that he was willing to pay the fine.

The victim, Ramokopana Ikaneng said he was happy that his cow was back. He received his cow together with two calves. " I am happy, my cow is back and I was given two calves in addition," he said.

He lost his cow two weeks ago. He said he will be selling it because it does not symbolise him anymore. "They cut out its horns and changed its bell, I am going to sell it, I cannot keep it looking like this."

Sebogodi said they were taking the law into their own hands because the justice system has failed them. "They steal from us, not the police, the court or the jail, so they must be punished by us, not the law," he said.

He said a cow was like a bank to a Motswana. "We use cows to live. It pays the bills and our children get the education they deserve because of these cattle," he said.