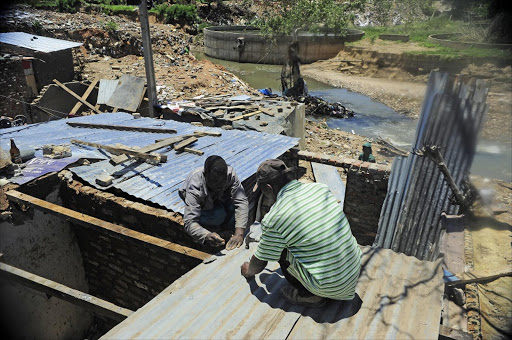 November 30,2016. Matthew Tebane and Elton Chibenga rebuild their home, which was destroyed by floods along the Jukskei River in Alexandra about three weeks ago. Pic: Thulani Mbele. © Sowetan.

The City of Johannesburg has extra 13 days in which to provide emergency relief to people living in Alexandra and Wynberg whose shacks were damaged during severe rainstorms and floods in December.

An application granted by the Gauteng Local Division High Court on January 10 gives the City until January 23 to provide emergency assistance by repairing and renovating the homes‚ according to a statement by the Legal Resources Centre (LRC) on Friday.

“It is evident that further anticipated rainstorms could result in the residents becoming homeless‚” the LRC said. “The residents are indigent individuals who rely on government social grants and low income work to survive and cannot afford the materials to repair the damage.”