Demand for road keeps pupils away 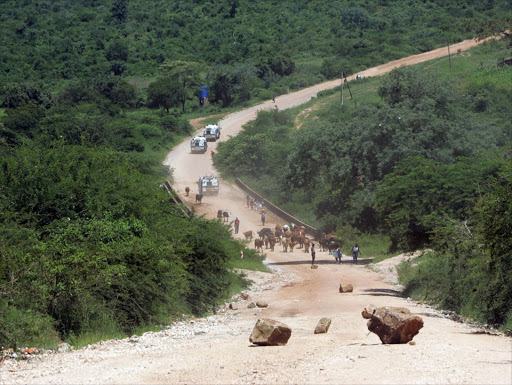 January 12 2017 . Rocks and other debris were used to barricade roads at Tshitale in Limpopo. Photo Antonio Muchave © Sowetan

Pupils from more than 30 schools in Limpopo were prevented from attending classes since schooling resumed on Wednesday due to a shutdown of the Tshitale area outside Louis Trichardt.

The shutdown was sparked by disgruntled residents over a 45km road construction project running from Bokisi to Morebeng.

The protest came just as the province recovered from demarcation protests in Vuwani which resulted in the burning of schools and preventing pupils from attending classes for over three months last year.

Residents under the jurisdiction of six chiefs we re demanding that the road construction, which was expected to cost between R80-100-million, resume as soon as possible after only 4.5km of the project was completed.

On Thursday, roads remained blocked with large rocks and tree branches while police vehicles could be seen stationed around the area. Schools and businesses were not operating. Sowetan spoke to pupils who said they were worried that they were falling behind with their studies.

"I feel very bad because I am supposed to start with my Grade 12 this year. I'm afraid this will affect my studies if the problem is not resolved," said Confidence Mabasa.

Confidence, a pupil from Tshiitwa Secondary School, said she was getting ready for school when her aunt told her to stay home because there was a protest.

Another Grade 12 pupil, Muende Maphiri, said she was also concerned that she could not go to school. "I'm worried because there is no school and shops are also closed. We are forced to buy food in Elim which is far," she said.

Provincial department of education spokesman Naledzani Rasila said about 30 schools were affected by the protest. Rasila said they were concerned that pupils were missing out on their lessons.

"We are very concerned that pupils are being blocked from attending classes,' he said.

Spokesman for the Tshitale Community Stakeholders' Forum Edson Khomola, said they did not call for the closure of schools.

"Parents kept their children from school because they feared for their safety," he said.

Khomola said services for social grants, clinics and undertakers were allowed to operate during the shutdown.

He said Vuwani was also an example that protests did not contribute to poor performance because a school in that area managed to get a 100% pass rate.

Khomola said negotiations between residents and the government would determine whether the shutdown would continue.

He said they were not happy that the provincial department of public works, roads & infrastructure and the Roads Agency Limpopo had reneged on an earlier promise to resume the project during April 2016, which led to residents deciding on a protest.

They were informed that construction would be pushed back to the 2017/18 financial year because there was no money, he said.

"We want to see machines [working on the road] or things will be bad," Khomola said.

He said the road which was expected to run through six areas, including Mashamba, Mulima and Chavani, would improve the local economy and make it easier to gain access to public transport.

MEC for infrastructure development Jerry Ndou condemned the shutdown, saying people should be patient. He said the province was faced with a road backlog of over 14000km, which required billions of rands. He said the community did not understand the commencement of projects was determined by the availability of funds, adding that one kilometre required R11-million.

Ndou said they hoped to clarify the misunderstanding during engagements with community leaders. "People must be patient. The road will be built," he said.