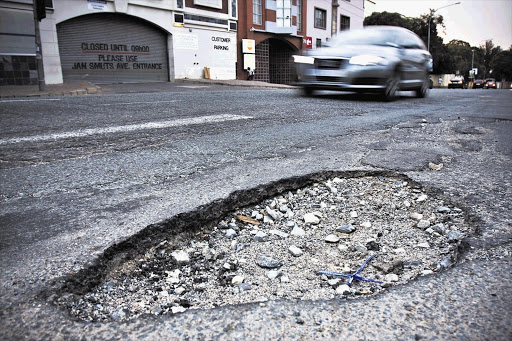 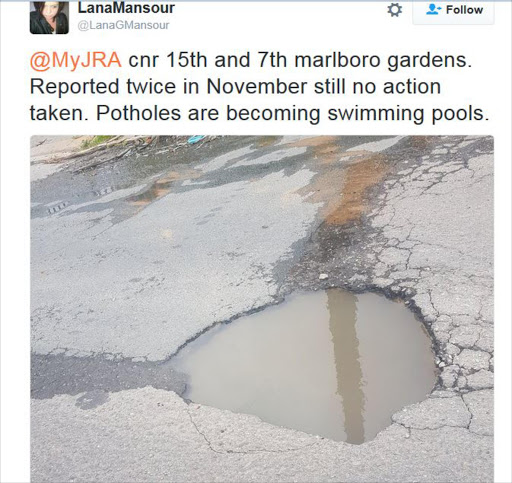 Despite persistent rains over the past two weeks‚ road deterioration is still the main reason for potholes appearing on our roads‚ according to the Johannesburg Roads Agency (JRA).

In the past few days city residents have logged numerous complaints relating to potholes on the JRA's Twitter account‚ @MyJRA – one of several platforms for reporting problems to officials.

One complainant called the potholes “craters” and claimed to have lost two tyres as a result.

Another resident tweeted a photo of a pothole that has apparently been left unattended for so long that it has started sprouting weeds.

JRA spokesperson Bertha Peters-Scheepers said heavy rains do lead to an increase in pothole occurrence‚ but that this mainly affects old roads already in poor condition.

“Areas city-wide [are affected] due to ageing infrastructure‚ where road deterioration has taken place.”

However‚ roads that have been resurfaced in a programme by the JRA are in good condition‚ she said.

Peters-Scheepers said that members of the public often confuse potholes with repair work‚ where parts of roads have been dug up and have not yet been reinstated.

It usually takes the JRA three working days to fix potholes‚ though this time may increase depending on the number of complaints.

A waiting period may not apply to all incidents: “All issues reported are inspected and those issues (including potholes) that may pose a serious danger to members of the public are immediately made safe. A yellow barrier or other material is installed to alert motorists to the danger where after the issue is repaired”.

Peters-Scheepers said the JRA ensures quality repair work has been done by sending out a team with a supervisor to do the work and an inspector to check their work.

In rainy conditions‚ temporary cold mix solutions are used to repair potholes until the rains have cleared. The permanent repair is then done with hot asphalt.

Potholes may be reported using the City of Johannesburg's call centre‚ the JRA's Facebook or Twitter accounts or its Find&Fix mobile app. - TMG Digital