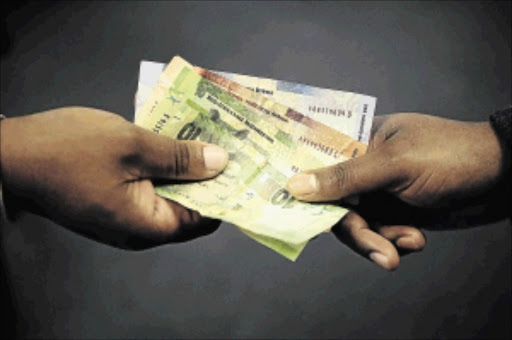 be cautious: Lending money to friends and family is always a wrong move to make as it causes unnecessary tension PHOTO: THULANI MBELE

A company linked to an alleged money-laundering scandal in which the Guptas are implicated has had to forfeit R14.5m plus interest held in its bank account with Mercantile Bank.

A notice of the forfeiture targeting Homix and finalised in terms of the country’s foreign exchange regulations was made by the Reserve Bank in Friday’s government gazette.

Reserve Bank deputy governor Kuben Naidoo said the R14‚5m plus interest which was forfeited to the state was the capital standing to the credit of Homix in an account with Mercantile Bank.

The forfeited money will be deposited in the National Revenue Fund.

Investigative reporters with amaBhungane had been on the trail of alleged money laundering of kickbacks through bank accounts belonging to Homix‚ a “letterbox company“.

These kickbacks were apparently paid in return for getting contracts with state-owned transport and logistics company Transnet.

It emerged during investigations that Homix purchased 16 batches totalling R65m in foreign currency from Mercantile Bank as payment for “imports“.

According to amaBhungane‚ Mercantile got suspicious and reported three of the purchases‚ totalling R14.4m‚ to the Reserve Bank’s financial surveillance department.

The Bank froze further transfers in May 2015 after inquiries revealed that customs documentation for the supposed matching imports had been falsified.

Homix allegedly offered Neotel a Transnet IT equipment contract in return for 10% of the contract value. Neotel paid Homix R35m and landed the contract‚ worth over R300m as well as a further R41m commission on another contract.

“Homix bank records later seen by amaBhungane confirmed the impression that it was a front to launder kickbacks‚ not a legitimate business‚” the investigative journalists reported.

“Records showed minimal office and no salary expenses. But they did show money flowing in and out of Homix at an astounding rate: R144m in and R189m out over just six months.”

“The inflows consisted largely of transfers from Neotel and four other companies‚ each of which benefited from Transnet contracts.”

Neotel’s auditors had reported the Homix payments to the Independent Regulatory Board for Auditors in April 2015 and it notified other authorities‚ including the Hawks. — TMG Digital/BusinessLIVE