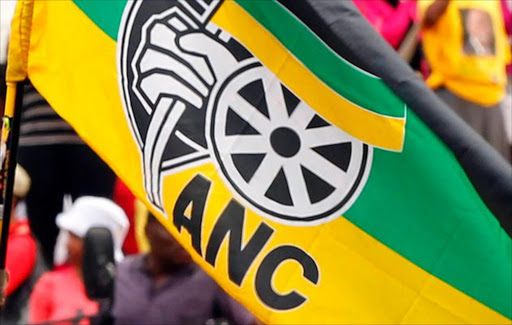 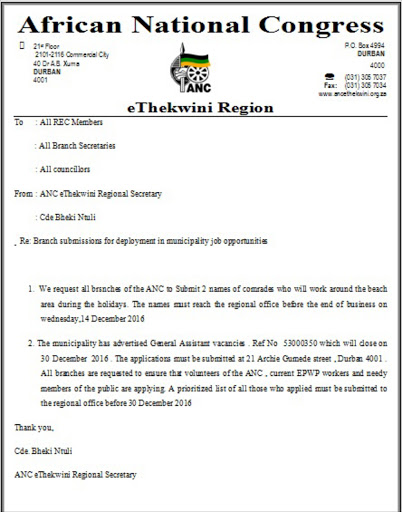 The battle for power deep in the chambers of Durban City Hall is continuing to rage‚ with the Democratic Alliance (DA) on Wednesday accusing a senior African National Congress (ANC) politician of trying to control the eThekwini municipality’s employment processes from the party’s CBD headquarters.

Last week‚ TMG Digital reported that Sithole had been ordered by mayor Zandile Gumede to go on leave until his five-year contract expired at the end of December. The ANC Youth League also called from him to be barred from his office.

But Sithole has reportedly defied the order‚ telling Isolezwe newspaper that it was business as usual for him. Sithole could not be reached for comment on Wednesday.

“The DA believes that Sithole is the victim of ANC bullying and stopping at nothing to insert its cadres into government jobs‚” he said.

The man at the centre of this allegation is ANC eThekwini regional secretary Bheki Ntuli. According to Mncwango‚ Ntuli sent an internal ANC memo asking branches to submit names of loyal members so they could get jobs in the metro.

TMG Digital has seen the undated memo‚ sent to branches under the heading: “Branch submissions for deployment in municipality job opportunities.”

The communication‚ quoted here unedited‚ states: ” We request all brsnches of the ANC to Submit 2 names of comrades who will work around the beach area during the holidays. The names must reach the regional office before the end of business on wednesday‚14 December 2016 . The municipality has advertised General Assistant vacancies . Ref No 53000350 which will close on 30 December 2016 . The applications must be submitted at 21 Archie Gumede street ‚ Durban 4001 . All branches are requested to ensure that volunteers of the ANC ‚ current EPWP workers and needy members of the public are applying. A prioritized list of all those who applied must be submitted to the regional office before 30 December 2016. Thank you‚ Cde. Bheki Ntuli. ANC eThekwini Regional Secretary. The People Shall Govern!”

Mncwango said: “The fact people must submit names to the regional office tells you there’s a problem there. Bheki Ntuli isn’t a [municipal] councillor‚ he isn’t employed by the city‚ but every time there is an executive committee meeting he is there at their caucus.

“I think he told himself he wants to control the city from Commercial City [the building housing the ANC regional office]. This is not a shock to me‚ coming from him. I expect something like this from him. That’s their dilemma with Sithole‚ there was this clash because he wants to separate the powers [political and administration].”

Ntuli said he would not engage the DA’s wild accusations via the media. He refused to confirm whether he had penned the internal memo. He also refused to comment on why he is always a permanent feature at the ANC council caucus meetings.

“Whoever has that memo you purport to also have is in possession of an internal ANC material. If they are not a member of any structure of the ANC they are not supposed to have that memo‚” said Ntuli.

At an ANCYL “Cadres Forum” event in Durban on Tuesday night‚ Thembo Ntuli‚ the region’s chair‚ repeated calls for Sithole to leave “immediately”.

“This man doesn’t listen to the ANC anymore‚” he said.

Sithole’s fate is likely to be decided at two special city meetings on Thursday. An executive committee meeting is scheduled for 9am‚ followed by a full council meeting later in the day – this despite council being in recess.

According to a text notification of the meetings‚ they were called to “discuss senior manager’s posts”. – TMG Digital/The Times