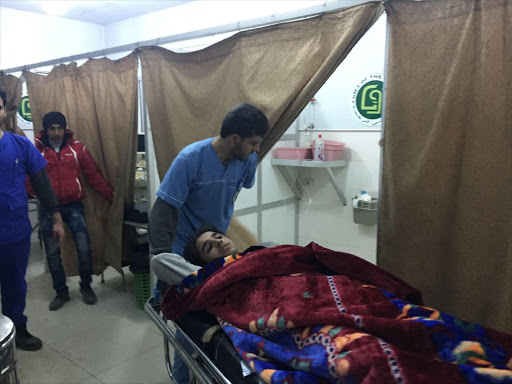 A father and his teenage son are among the first patients treated at the Ar Rahma Hospital in Syria. Picture Credit: Supplied

Text message exchanges between staff at the Gift of the Givers-backed hospital in Syria has laid bare the situation in the war-torn city of Aleppo.

“We receive family. Five casualties and one family and they still coming. They talk about horrible stories: hunger‚ intense bomb‚ chemical attack‚ genocide‚” a doctor at the Ar Rahma Hospital said.

The hospital is about 95km from Aleppo‚ the scene of intense fighting between government forces and so-called rebels opposed to Syrian president Bashar al-Assad.

The doctor’s massage was one of a number sent to Gift of the Givers founder Imtiaz Sooliman‚ who spoke to TMG Digital on Friday morning. Among those being treated was a 40-year-old man and his 16-year-old son. The dad was injured in a rocket strike‚ and his son’s chest hurt by shrapnel. Fifty people are being taken in at the hospital.

Other injuries included a dad whose arm was amputated because of injury and his son treated for a chest injury. Two sets of brothers are also being treated for check and abdominal injuries.

Thousands of residents of Aleppo are currently being evacuated amid the clashes. About 50‚000 people will need to leave the city.