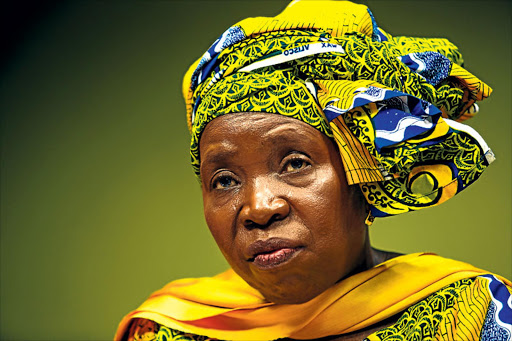 A group referred to as “The Black Hawks” is planning to incite a “popular revolt”.

That’s if Gauteng Hawks head Major-General Prince Mokotedi — the author of explosive allegations of a political plot involving treason‚ espionage and the assassination of top cops – is to be believed.

The allegations are contained in an affidavit deposed by Mokotedi on Monday‚ and on Wednesday he attempted to back up those claims by telling Radio 702 (www.702.co.za) that they were based on solid intelligence and credible sources.

Intelligence in this country‚ however‚ doesn’t always seem credible‚ with a number of spectacular blunders in the sector reported over the years‚ including one in which then Deputy President Jacob Zuma’s supporters were said to be planning a “street-level revolution in South Africa”.

We look back at a selection of these missteps.

In 2007‚ this report‚ compiled by the Directorate of Special Operations – the now defunct Scorpions — found that “there are strong indications that former Deputy President Jacob Zuma’s presidential ambitions are fuelled and sustained by a conspiracy playing out both inside South Africa and on the African continental stage”.

It alleged that Zuma had the support of Angola’s President Eduardo Dos Santos’ intelligence services as well as the promise of financial support from late Libyan leader Muammar Gaddafi Muammar Qaddafi.

Theses were‚ the report said‚ aimed at the “promotion of a street level revolution in South Africa‚ in support of Zuma’s political aspirations”.

The report was dismissed at the time by the director-general in the Presidency‚ Frank Chikane‚ who described the “provocative‚ deliberate and baseless allegations” as being part of a campaign to destabilise South Africa and the region.

He also described the sources of information in the report as discredited “information peddlers”.

Then President Thabo Mbeki was‚ however‚ recalled by the African National Congress (ANC) in 2008‚ and ultimately replaced by Zuma in 2009 following Kgalema Motlanthe’s brief interim presidency. The Scorpions were disbanded in 2009.

It wasn’t quite the corridors of power for Zuma’s ex-wife‚ African Union Commission chairperson Nkosazana Dlamini-Zuma‚ whose minders had to sleep in the passage of an Addis Ababa hotel after Ethiopian and South African spies had been unprepared to neutralise “an eminent threat” to her life.

According to leaked intelligence agency documents complied by Al Jazeera’s Investigative Unit and The Guardian newspaper‚ the blunder happened shortly after Dlamini-Zuma assumed the position in 2012.

The State Security Agency (SSA) conceded that it was unable to foil the plot‚ which it took “with the utmost seriousness“‚ saying that “the available time would not allow the host service to neutralise the operation”.

The situation led to Dlamini-Zuma’s bodyguards having to sleep “in corridors for four days without food and water”‚ which “created a gap since they have to go out of the hotel to get food and water‚ leaving the chairperson unattended‚ therefore vulnerable.

State Security Minister David Mahlobo made a mess trying to get himself out of a jam when trying to explain a signal blackout during President Jacob Zuma’s State of the Nation Address in the National Assembly in February 2015.

After much prompting‚ Mahlobo said that the “event was rated major based on intelligence reported prior to the event which was unprecedented“‚ but then added that the “signal disruption was caused by an operational error by the member on duty”.

Stressing that it was unintentional‚ Mahlobo added: “The operator failed to properly terminate the device and this impacted on proper access to some users of mobile phones.”

In September this year‚ the Supreme Court of Appeal ruled in favour of court action initiated by several media houses and civil society groups and found that the actions of SSA and Parliament were unlawful.

Thuli makes the ‘grade’ as a CIA spy

Mahlobo followed up the signalling-jamming incident with the bold announcement in March 2015 that he had instructed the SSA and other departments to “verify and determine the veracity” of online allegations that popular public protector Thuli Madonsela was in the pay of the CIA.

The claim was that she was in the practice of “gathering information about Presidents of countries that are opposed to the interests of the US”.

These claims – and similar ones about Economic Freedom Fighters firebrand Julius Malema‚ former Democratic Alliance leader in Parliament Lindiwe Mazibuko and Association of Mineworkers and Construction Union president Joseph Mathunjwa – were based wholly on an article contained on a blog called africainteligenceleaks.wordpress.com.

Madonsela at the time rubbished Mahlobo’s comments‚ saying “a Grade 9 pupil could see it is rubbish”‚ and it emerged that she had actually reported the blog to SAPS Crime Intelligence Unit way ahead of Mahlobo’s announcement.

The DA’s David Maynier crowed about the intelligence lapse‚ saying it “appears to be a lunatic fringe blog‚ dedicated to peddling conspiracy theories‚ and which cannot even spell ‘intelligence’ ”.

Mahlobo’s predecessor‚ Siyabonga Cwele‚ “lost all love and affection” for his wife Sheryl Cwele‚ and nearly lost his job because of her.

They did not buy his claims that he was unaware of her illicit activities.

“This now puts pressure on him as the minister of security and on all other agents of security. His capacity should be above suspicion. He is supposed to be a man of integrity and he should’ve known‚” DA MP said in Parliament.

He divorced her quietly in August that year.

In 2003‚ the City Press reported that national directorate of public prosecutions boss Bulelani Ngcuka had been investigated by the exiled ANC “in the late 1980s to establish whether he was an apartheid spy”.

Similar allegations were published in the Sunday Times‚ but investigative reporter Mzilikazi wa Afrika claimed Zuma played a hand in those claims.

He said that Zuma had agreed to leak the questions put to him by the Scorpions to the Sunday Times.

Wa Afrika wrote in a memoir that senior political reporter Ranjeni Munusamy “flew to Durban on 26 July 2003 and later that morning phoned to say ‘the chief could only give us those questions on condition that we agree to publish a story next week that Bulelani [Nguka] was a spy’ ”.

Zuma’s former spin doctor Mac Maharaj‚ who was said to be one of the main accusers of Ngcuka‚ however had to concede on the claims that “there is never enough information until you have established a thing with 100% certainty”.

In November 2016‚ Mahlobo made headlines again‚ when the lawyer for Nompumelelo Ntuli-Zuma told the Sunday Times that the minister had instructed his client to leave Nkandla after he accused her of trying to kill Zuma by allegedly adding poison to his food.

Ulrich Roux‚ MaNtuli’s lawyer‚ said Mahlobo told his client she could not be at the homestead because of “a sensitive matter” his intelligence department was investigating‚ the newspaper reported.

Mahlobo‚ however‚ denied that he had personally ordered MaNtuli to leave Nkandla‚ but did confirm that he had reported her to the Hawks.

“There was no role I played in this matter. As a man‚ I cannot go to another man’s house and chase away his wife‚” he said. – TMG Digital