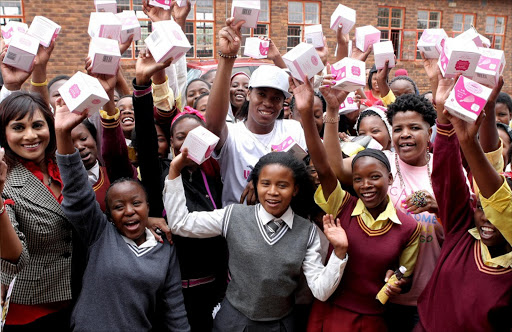 Joy erupted at Nthema Secondary School in Fairlie village, Moletjie, when Semenya arrived at the school from which she matriculated in 2008.

Apart from talking about reaching for dreams, Semenya also distributing sanitary pads and menstrual cups to a highly appreciative group of girls.

She said the aim of her foundation was to assist young girls and support the development of sporting codes across South Africa, working with partners from other nations within the SADC region.

Her foundation has partnered with the company which manufactures the Princess D Menstrual Cup as well as the Thalita Koum Network for Girls which was founded by Limpopo sports MEC Onicca Moloi last year.

Semenya said sports in the province, especially athletics, had declined in recent years and was in need of more support so that young talent can be groomed.

She said the foundation would host camps and coaching clinics.

Semenya said it was also disturbing to see girls, especially in rural areas, using newspapers and socks as absorbents during periods, as they could not afford sanitary pads.

She said the reusable menstrual cup, which costs about R300, was a cheaper method to help the girls, as it is reusable up to 10 years.

Semenya said she was honoured that the provincial department of sports, arts and culture planned to name its building after her.

"It is such a great honour to walk in the footsteps of other great leaders. It is a legacy for my surname."

Addressing the audience Semenya encouraged pupils to work hard so that they can have a brighter future.

Also joining the fun was Princess D founder Shamila Ramjawan, who gave demonstrations on how the menstrual cup is used.

Grade 11 pupil Lethabo Setati, 17, said they felt honoured to have Semenya visit them.

"The pads also mean a lot to us. There are girls who end up missing school because their parents don't have money for sanitary pads," Lethabo said.

Rejoyce Kganyago, also a Grade 8, pupil at the school said she looked up to Semenya.

Moloi, Limpopo MEC for sport, said her foundation would donate 500 sanitary pads for every quarter to the school as well as a bursary for the best performing female pupil.

Moloi said the multi-award winning Semenya was a shining example of how a young woman can rise above trying circumstances to become the best.

"Caster showed us that a young girl can rise. She rose up in the midst of adversity," Moloi said.

She said there was a huge need for development especially in rural areas, adding that every child deserved to be afforded an opportunity to succeed.

"The need is broad. We wish we had more business people to assist young people and plough back."