Ex-workers, some sickly, holed in hostel since 2009 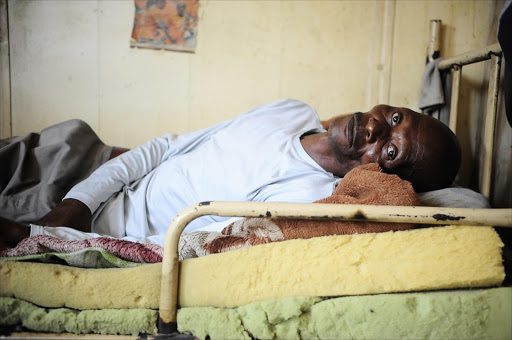 More than 100 dismissed ex-miners are eating jackals, wild birds, cats, monkeys and rats to survive at a tuberculosis-infested hostel where they have been waiting for seven years for their provident fund payouts.

Circle Labour hostel, which was owned by Kroondal Platinum Mine in Rustenburg, North West, is home to 146 former mineworkers who have been trapped in poverty and disease since Murray and Roberts Cementation fired them for taking part in an unprotected wage strike in 2009.

The mine was later owned by Aquarius Platinum but is currently controlled by Sibanye Gold, which pays the miners' rent, electricity and water at the hostel.

"We eat everything here. If a cat walks into this hostel that will be our dinner," said sickly Paballo Mpasi.

Mpasi collects plastic bags and monkey skins to create hats which he sells for R150.

The miners were part of 3921 members of the National Union of Mineworkers who were dismissed after they went on a wildcat strike.

Many who are from Lesotho and Mozambique, cannot afford to go home while others simply don't want to face the embarrassment of arriving home empty-handed. Lehlohonolo Morake hunts snakes and other reptiles and uses their skins to make bracelets to sell.

The miners say they would rather die in the hostel. Already 169 of them have died from tuberculosis and silicosis and were given paupers' burial at a nearby unofficial cemetery.

The hostel consists of 21 prefabricated rooms which are shared by up to nine people. They sleep on single beds made of steel and sponge. The rooms are congested, making it easy for diseases to spread. Added to this is the fact that they share four toilets and 11 showers. The basins outside the toilets are used to wash clothes, blankets and dishes.

Most of the miners survive by hunting, doing odd jobs at nearby farms, recycling bottles or making hats using monkey skins.

"TB is back this year. I can't take my treatment constantly because we don't have enough food. These pills actually make me sick if I take them on an empty stomach. We are all sick here, but I'd rather die here than go home with nothing," Phillip Phamotse explained.

"When I cough I affect the other men that I live with because it's congested here. I contracted TB in 2009 and after six months of taking treatment it had cleared."

Dozens of emaciated men were going in and out of their rooms to the toilets. Elpideo Mutemba, the spokesman for the group, said when they were fired some of them got R2000 and others R4000 after working for MRC for a decade.

"The company then blacklisted us and evicted us from Central hostel, resulting in many of us losing our passports, IDs and other assets.

The eviction decision was overturned by the labour court and the mineworkers were moved to Circle Labour hostel in 2009.

The company initially disconnected electricity and water from the facility, however, an intervention by Lawyers for Human Rights resulted in the reconnection.

"We are not going anywhere. We will stay here and bury each other until we get what is due to us," Mutemba said.