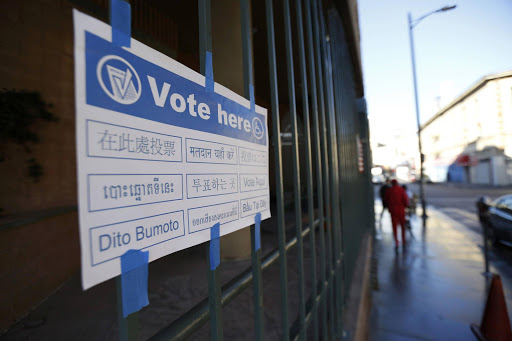 A voting sign written in different languages is pictured outside a polling place during the 2016 presidential election at the Los Angeles Mission in Los Angeles, California. REUTERS/Mario Anzuoni

One man was killed and two women wounded when a gunman opened fire with an assault rifle at a house across the street from a polling station in the Southern California town of Azusa on Tuesday, police said, before the gunman was also found dead.

However, Los Angeles County Sheriff's Lieutenant John Corina said the bloodshed had "nothing to do with" Election Day. "It just happened to be across the street," he said.

Corina said the two wounded women were struck by stray bullets. The Los Angeles Times, citing a law enforcement source, said one of the victims hit by gunfire was on the way to a polling place to vote.

Azusa police earlier described the shooter as a heavily armed female and said there were reports of a possible second, male suspect.

However, Corina later said police had confirmed that only one suspect had been involved - a man found dead inside the house by police. He said it was not immediately clear whether the gunman was killed by police or had taken his own life.

Officers responding to initial reports of gunshots came under fire themselves as they tried to assist victims found bleeding outside the home, according to accounts from Azusa police and the sheriff's department.

Police returned fire and then surrounded the house, cornering the suspect inside, authorities said.

Three civilians - two women and a man - had already been struck by gunfire. The man was pronounced dead at the scene and the two women were rushed to a hospital, where they were listed in critical condition, police said.

Authorities said the motives of gunman were unknown.

"We're in the process of trying to figure out why this happened, and who this person is, and what exactly made him snap," Corina said.

The incident began around 2 p.m. local time (2200 GMT) as residents of Azusa, like Americans across the country, streamed to the polls to cast ballots in the U.S. presidential race between Democrat Hillary Clinton and Republican Donald Trump.

The Los Angeles County Registrar and Recorder's office issued a Twitter advisory urging voters to avoid the area around two polling locations, one in a park and one at an elementary school, and to cast their ballots at other polling sites.

Two other schools nearby were also locked down and then evacuated, Azusa Police Chief Steve Hunt said.

The Los Angeles Times said the person killed was a man in his 70s.