'Act now‚ do the right thing‚ time is not on our side': Mbeki on a party and country in crisis 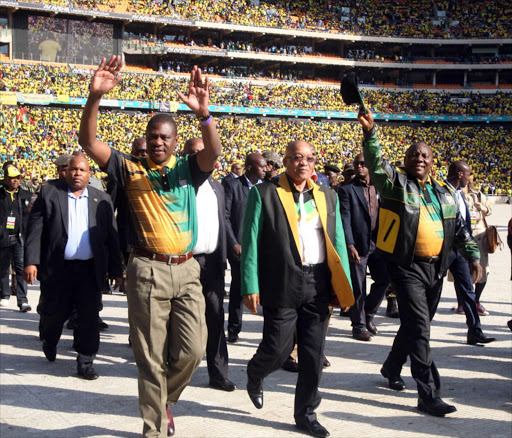 Delivering the keynote address at the Sunday Times Top 100 event in Sandton on Tuesday night‚ Mbeki said it would have served South Africa well if all parties in Parliament discussed the observations of the ConCourt “to ensure that all relevant institutions operate as they should‚ as required by our Constitution”.

In the widely hailed judgment in the Nkandla matter‚ Chief Justice Mogoeng Mogoeng ruled that Zuma failed to uphold the Constitution when he second-guessed Madonsela’s report.

“If Parliament had done what I suggest‚ honestly and seriously‚ this would have made the strategic intervention we need to pull the country out of the unhappy political situation in which it is and put us on course to achieve the quality governance system we visualised when we adopted our Constitution 20 years ago‚” Mbeki told the gathering.

Mbeki’s criticism of Parliament comes a week after he wrote a letter to Zuma urging him to listen to the 101 African National Congress (ANC) veterans who have called on Zuma to resign following another damning report by the public protector.

Mbeki’s speech can be interpreted as a veiled attack on the ANC — which used its majority in Parliament to block moves by the opposition to pass a vote of no confidence against Zuma following the Nkandla court judgment. His speech also comes as the opposition is preparing to push through another vote of no confidence against the president — which is again expected to be defeated by the ANC majority.

Since the Constitutional Court judgment‚ Zuma merely apologised to the nation while the ANC national executive committee said it took collective responsibility for the matter.

Mbeki said that South Africa is immersed in a general crisis and argued that both political and economic factors are reasons for this.

“Fortunately‚ we have not as yet arrived at the tipping point when the country becomes ungovernable‚ with disastrous consequences for black and white‚ rich and poor‚ and young and old alike. This is an eventuality we must avoid at all costs‚” he said.

Mbeki urged business leaders attending the event to “act now and do the right thing because time is not on our side”.

The former president spoke out against negative features that have crept into the ANC and included the “disease” of abusing political power for personal enrichment.

He mentioned endemic corruption‚ looting of public resources through tenderpreneurship and the drift of the ANC away from ordinary people.

“The so-called state capture which speaks to the disease of direct control of people in responsible positions in the public sector by particular business interests‚” Mbeki said.

State capture has been hotly debated for much of this year as revelations about the notorious Gupta family’s alleged attempts at manipulating government business made headlines.

It culminated in a scathing report by former public protector Thuli Madonsela — entitled State of Capture — which details how the Gupta family amassed state contracts as a result of their political influence.

“What this means is that all this serves to undermine and weaken the capacity and possibility for the governing political authority to discharge its responsibilities‚” Mbeki said.

On state capture‚ Mbeki further stated: “As all of us have seen‚ the current raging debate about the so-called state capture has brought sharply to the fore questions about the attitude of capital as a whole to the resolution of our country’s national challenges‚ and whether the drive to make money at all costs means that capital is ready even to subvert the constitutional order.”

He said that if business does not play its role alongside society to address the political challenges the country faces‚ the general crisis South Africa faces will get even deeper. – TMG Digital/BusinessLIVE