Siblings' house to be rebuilt 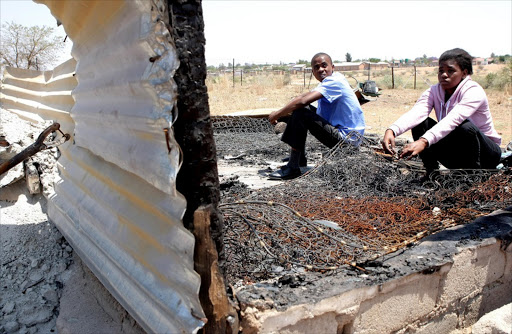 Thabang Mabotja, 16, and sister Noleen, 18, assess their loss after their shack caught fire on October 4. The orphans from Ga-Mabotja village in Moletji, Limpopo, are now homeless. Photo Sandile Ndlovu. © Sowetan

An early Christmas is coming the way of the Limpopo child-headed household which became homeless after their shack was burnt down in a fire earlier this month.

The two siblings, Noleen Mabotja, 18, and her younger brother, Thabang, 16, will have shelter after Good Samaritans offered to help them rebuild their house in Mokgau Park section of Ga-Mabotja village, Moletji, after their plight was highlighted in the Sowetan last week.

The children' house was burnt to ashes on October 4. On that day Noleen was away visiting the father of her two-year-old son.

Thabang was awoken by smoke and had to escape through a window.

Through its disaster management unit, the Polokwane Municipality could only offer two blankets as a gesture of relief to the children.

Speaking to Sowetan, Noleen was so excited about the generosity by various people who are keen to ensure that they got their lives back on track.

"As I'm speaking to you, building materials have been delivered after they were bought by a Sowetan reader who was touched by our situation. And we are thankful for the help we are getting," she said.

She said another businesswoman had offered to buy them clothes while their neighbours have also offered to rebuild their modest dwelling.

"We are looking forward to moving into the new house before the end of November, and it will be the best Christmas we have ever had."

The family is currently being accommodated at their uncle's home in the village. Their uncle Lisboy Makweya said he was happy for his nieces.

"It gives me great joy that the children will now have a place to call their home. I want to thank all those who extended a helping hand to ensure that the children's dignity is restored," Makweya said.

He said they were busy gathering sand so that building of the house would start soon. The children survive on social grants.

Thabang, a Grade 10 pupil at Mohlapetsi Secondary School, will be sitting for exams this week. Their mother died in 2007 and their father's whereabouts are unknown.