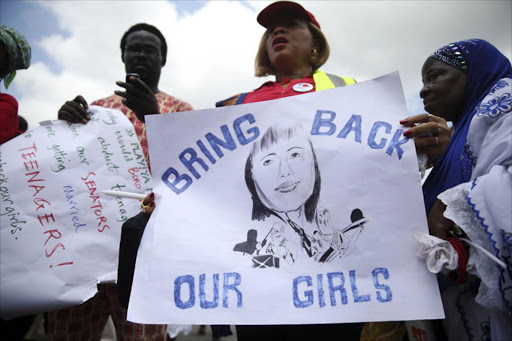 People take part in a protest demanding the release of abducted secondary school girls from the remote village of Chibok, in Lagos, Nigeria. REUTERS

One of more than 200 schoolgirls abducted by jihadist group Boko Haram from their school in northeast Nigeria’s Chibok in 2014 has been found by soldiers, a Nigerian army spokesman said on Saturday, weeks after the militants released 21 of the girls.

Around 270 girls were kidnapped in April 2014 by the Islamist militant group, which has killed 15,000 people and displaced more than two million during a seven-year insurgency aimed at creating an Islamic caliphate in north-east Nigeria.

Dozens escaped in the initial melee, but more than 200 remained missing for more than two years.

Sani Usman said the girl, Maryam Ali Maiyanga, was discovered by troops who were screening escapees from Boko Haram’s base in the Sambisa forest on Saturday morning in Pulka, Gwoza Local Government Area, in Borno State.

“She was discovered to be carrying a 10-month-old son, named Ali. She has been taken to the unit’s medical facility for (a) proper medical check up,” said Usman.

Bring Back Our Girls, a group of campaigners with close ties to relatives of those abducted, said “preliminary investigations” showed the girl was number 198 on its register of the kidnapped girls.

In a statement, the campaign group said she was from Askira Uba, a district of Borno state, and was abducted along with her twin who is yet to return.

Last month, 21 of the girls were released by Boko Haram following talks with the government brokered by the International Red Cross and the Swiss government. The government has vowed to rescue the girls still being held.

The first of the schoolgirls to be found was discovered by soldiers on the edge of the Sambisa forest, a former colonial game reserve in Borno state about 100 km (60 miles) from the village of Chibok, in May.

MILITARY OFFENSIVE Nigeria’s military has been carrying out a large-scale offensive in the vast woodland area and other parts of Borno state, the epicentre of the insurgency, in the last few weeks.

“We lost an officer and four soldiers, while four other soldiers sustained various degrees of injuries during the encounter,” he said.

Boko Haram has kidnapped hundreds of men, women and children but the kidnapping of the Chibok girls brought worldwide attention to the group and widespread condemnation.

The group, which last year pledged loyalty to the militant group Islamic State, controlled a swathe of land around the size of Belgium in early 2015.

Nigeria’s army, aided by troops from neighbouring countries, has since recaptured most of the territory, although the jihadist group still stages suicide bombings in the northeast, as well as in neighbouring Niger and Cameroon.