Matric maths papers to be inspected after leak 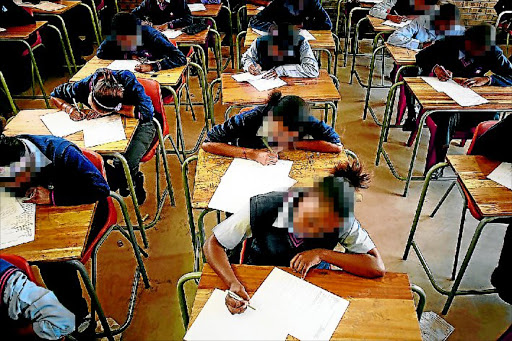 Pupils write exams in this file picture. A few schools in Limpopo had access to a leaked mathematics paper 2 exam before it was written on Monday. The answer scripts at all the affected schools have now been quarantined. PHOTO: DANIEL BORN

Grade 12 mathematics paper 2 exam scripts from all schools at a Limpopo circuit will be quarantined after the question paper was leaked to pupils.

"The department has established that learners in a few schools in the Mopani district have had access to the leaked maths paper before the paper was written.

"We are going to quarantine all the scripts of the schools in the area to establish if there are any patterns," said Department of Basic Education (DBE) spokesman Elijah Mhlanga.

This came after Limpopo MEC for education Ishmael Kgetjepe said last week he was confident there would not be any leaks of question papers as the province had heightened security for this year's matric examinations.

The exam paper was leaked to pupils in Giyani .

The leak was just four days after pupils started writing their final exams.

The paper was written on Monday.

Last year, Limpopo was also one of the provinces involved in a cheating scandal when a life sciences question paper was leaked in the Vhembe district, and two pupils were identified in the scam.

In a statement yesterday, the department said it was "shocked and disappointed" by the act and said it had since involved the Hawks and police to investigate the matter.

It also said it had already opened a case with the police.

"A team from DBE and province are working together with law enforcement to get to the bottom of this matter so that we can take appropriate action," Mhlanga said.

He also told Sowetan the leak was picked up by an invigilator in one school through "strange behaviour" by some pupils.

Mhlanga said one pupil asked to go to the toilet and was accompanied by an invigilator.

On the way to the toilet, the pupil made "strange remarks" that prompted the invigilator to further investigate.

He said the pupil then spilt the beans and told the invigilator someone gave them the paper in their study group and that's how they benefited.

He said a group of senior officials will go to Limpopo today to try and get to the bottom of the leak.

Police spokeswoman Colonel Ronel Otto confirmed the case was being investigated by the Hawks.

However, Hawks provincial spokesman Captain Matimba Maluleke said he had not yet received information the unit was investigating the case.

Last week, Kgetjepe said question papers were being packed through an automated system which ensured they were packaged and sealed in a way that would eliminate the risk of tampering.

"Papers were sealed in an automated process so there is no contact between the question paper and any of our officials coming from government printers until the principal opens the box.

"There is no aspect that we have not dealt with. We think we are ready," said Kgetjepe.

Speaking at a media engagement recently, the department's chief director of national assessment and public examination, Rufus Poliah, said the department was doing all it could to make sure that it strengthened security during matric exams, especially because the exams were "high stakes".

"The outcome of this examination determines the status of the school in the community and therefore there are all kinds of pressures that are brought on the school.

"And, internationally, in examinations that are high stakes there has to be a strong monitoring component and therefore we are devoting more attention to the monitoring of these examinations and we try and make sure that across the country every examination that is written gets monitored but obviously it might not be possible in some of our larger provinces.

"The fact that we've had group copying in 2014 is an indicator that some of our centres cannot be trusted fully with the administration of an examination," said Poliah.

Provinces that were involved in the group copying scandal two years ago were KwaZulu-Natal and Eastern Cape. While most cases from the scandal were concluded, the matter of 139 pupils from Mashiyamahle High School in Ndwedwe, northern KwaZulu-Natal, who took the department to court will still awaiting the outcome of the case.

The pupils were demanding the release of their results and also denied cheating.