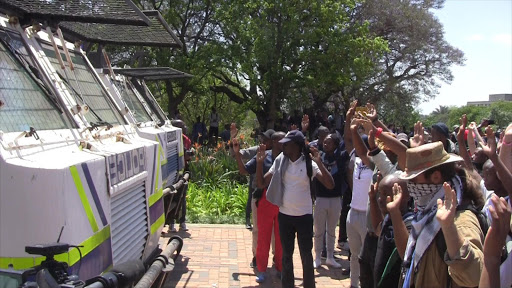 Universities have begun tallying the cost of the 2016 round of #FeesMustFall protests, with one estimate placing the cost of property damage at R1-billion.

In September, Higher Education Minister Blade Nzimande estimated the cost of property damage was around R600-million, beginning with the 2015 fees protests.

Meanwhile, the police have confirmed spending over R3-million on overtime for police in Gauteng alone. Police would not provide figures for the overtime bills in other provinces.

"People must not just equate it to a lot of money spent . but consider how much damage students would have caused if the police were not there. It was necessary and it was money well spent," said Thapelo Moiloa, spokesman for the Gauteng MEC of community safety.

"Police resources have been stretched because we have had to bring in officials from other police stations. We have had to put aside other priorities to focus on the protests. There will be a lot of backlogs to deal with."

The South African Special Risk Insurance Association (Sasria) has confirmed paying out more than R300-million to universities who claimed for damages , with numerous claims - especially from the latest wave of protests - not yet assessed and paid out.

Sasria executive manager Thokozile Mahlangu said: "We haven't received the new claims yet. They are slowly coming in, because we don't deal directly with the end client, we get the claims through other insurance. So the claims are still coming in and they must still be quantified and investigated."

She said claims were usually for damages related to lecture halls, labs, libraries and books.

Universities of South Africa chief executive Professor Ahmed Bawa estimated the cost of property damage could be "anywhere between R700-million and R1-billion".

"What we do know, at the time that UJ [University of Johannesburg] had the big fire - the burning of the Sanlam auditorium - the figure had reached about R500-million.

"We suspect now with all the recent fires, the figure could be anywhere between R700-million and about R1-billion. We don't have the numbers yet, but we suspect it is certainly above the R700-million mark. It's a crazy situation."

UKZN has estimated the damages to be around R60-million.

NMMU spokeswoman Zandile Mbabela said the clubhouse and large hall gutted in fires would make up most of the estimated damages of R6.7-million suffered in recent weeks.

CPUT spokeswoman Lauren Kansley said it wasn't possible at this point to estimate the cost of damages. She said the logistics around claiming " takes many months. While the insurance claims are on the go, people still have broken windows."

Department of Higher Education spokesman Harold Maloka said he wasn't able to provide estimates of damages. "The main thing the department has been involved in is addressing the concerns of students and saving the academic year."