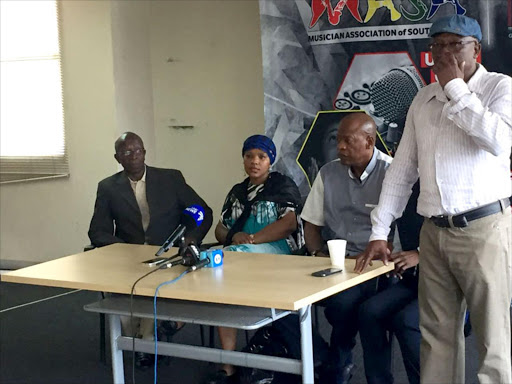 Mandoza's widow Mpho Tshabalala has moved to squash weekend reports that there was a feud between her and poet Mzwakhe Mbuli and Kevin Ntaopane, the late musician's manager.

In a show of solidarity, the three parties arrived together at a press conference they called at the offices of SA Music Rights Organisation (Samro) in Braamfontein, Johannesburg, yesterday.

Mpho insisted she had not accused anyone of fraud.

"I never went to any newspapers accusing anyone. People know the kind of person I am. They will know ukuthi [that] I never said anything. Hence, ubhuti Mzwakhe called from Sunday saying 'sizoyilungisa lento' [we will fix this]," Mpho said.

She thanked Mbuli for "being a brother" to her and remaining calm when the reports surfaced.

Mbuli rubbished the reports, saying he had not written a letter to Masa. He called on the publication to publish the letter.

"They were supposed to publish the letter. Show the world the letter like we are doing with the Guptas and Pravin [Gordhan]."

Mbuli said Samro had stringent rules on artists' money and would not issue it to just anyone.

"We need to have a letter here, even when Vuyo Mokoena, Lucky Dube passed on, everybody comes here. So the family would know Samro has got strict rules.

Mbuli said he and Masa were considering legal action following publication of the story.

Thabiso Sithathu, president of Masa, said: "We will seek advice on how can we sue for defamation."

Mandoza robbed from the grave – Sunday World stands by its story

According to the article, Sithathu informed Mpho he received a WhatsApp message from Mbuli in which he said he was in possession of a letter, allegedly from Mpho, requesting the money, a letter which he said was sent to him via WhatsApp.

It goes further to say that Sithathu was shocked to hear that Mpho never wrote the letter and said that he will talk to Mbuli because he is a friend.

"Mine [quotes] are correct except for the part where it kind of paints a picture that I'm accusing Mzwakhe of fraud. I would never do that," said Sithathu.

"Mzwakhe is a member of Masa, he's a colleague, he's a legend, I respect him. If there are any issues, we work together. We will resolve them. I would never go to the media and report that he's trying to defraud the family."

Ntaopane said he was shocked by the allegations that he pocketed donor funds meant to assist with Mandoza's burial as well as the supposed letter. Sunday World editor Abdul Milazi said they stood by their story. "Anyone who claims to have not spoken to our reporter is telling a serious fib," Milazi said.