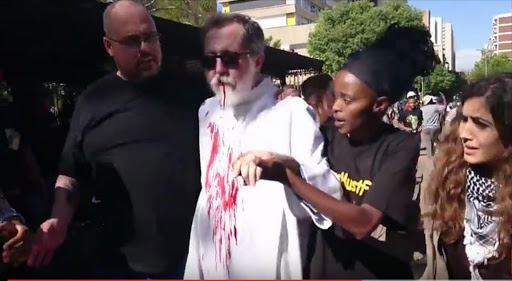 From within the grounds of the Holy Trinity Church in Braamfontein the voices of a singing mass grow louder‚ interrupting Father Graham Pugin’s speech.

After establishing that the voices were not those of university students protesting fee hikes‚ Pugin released a sigh of relief and a good-humoured phrase — “Jesus give me a break”.

Pugin has spent recent weeks acting as a discreet mediator between those party to discussions over fees‚ allowing them to use the church’s facilities to hold meetings.

His role in the movement became more pronounced last week‚ however‚ when he was photographed in a stand-off with a police nyala outside the gates of the Catholic church‚ where students and homeless people had taken refuge from the firing of rubber bullets.

Later further photographs of the priest flooded social media platforms. His vestments soaked with blood. Pugin had been shot in his leg and his lip with rubber bullets.

On Sunday the priest‚ of the Jesuit Institute of South Africa‚ gave his first public speech since the incident‚ which saw him pose for a good few selfies with students.

Pugin admitted that it was “trauma” that led him to pause his speech when the singing voices rang‚ but spoke less of this. Instead he focused on his commitment to non-violence.

Locating the precise origin of his pacifism is difficult‚ says Pugin‚ but it is likely rooted in childhood.

“Probably anyone of you who was bullied as little child shares a similar story. I learnt that the only way to deal with bullies was to stand up to them.”

As a biblical studies student Pugin understood‚ according to scripture‚ that God is an advocate of the poor through peace.

“I wrote a long‚ and I hope articulate‚ letter to the chaplain general explaining to him why I was not prepared to do conscription.

“The reply from the chaplain general was rather more succinct than mine‚ it was exactly two lines along the lines of ‘get your ass here or else’.”

Pugin reported for duty in Middelburg where he was given the speech about “how we were going to exotic lands to meet interesting people and shoot them”.

As the young conscripts were given a chance to explain why their call-ups should be delayed‚ for exams or a family emergency‚ Pugin lined up to explain that he was not prepared to kill people.

“This was clearly a notion they had never heard before … I was taken to the medical base‚ where I was clearly far too dangerous to be allowed into the wards. I spent the night locked in the vault of Barclay’s Bank.

“In the morning I was taken before the commandant who realised that this curious notion of refusing to kill people was indicative of dangerous lunacy. I was packed into ambulance and taken to the first military hospital in Johannesburg.”

In his time at the hospital‚ where he stayed with patients suffering trauma inflicted during their military service‚ Pugin learnt to weave baskets.

“I learnt more at that point about basket making than I have ever needed in the rest of my life.”

He recalls an assault on him at the institution by another patient in the bathrooms‚ which he says affirmed his commitment to non-violence.

Upon stealing his medical records Pugin discovered the only reference to the incident read: “Patient Pugin is withdrawn after attack by patient Van der Meulen.”

In Pugin’s long career as a university chaplain‚ he has been involved in many protests. Last Monday‚ he had anticipated the violence that erupted in Braamfontein and was prepared for it.

He had joked with the church’s congregation that‚ “whereas most clergy complain that young people don’t want to come to church‚ I have twice had my gates broken down by people wanting to come to church”.

Throughout the day’s clashes‚ Pugin’s stance was plain: “I wanted it to be abundantly clear to all that this is a safe and sacred space where all may seek sanctuary. I don’t enquire as to the state of your soul‚ I don’t enquire as to your state of grace‚ I don’t need to know whether you are innocent or guilty‚ if you seek sanctuary you are welcome here. That has always been the church’s policy.”

When Pugin defended that policy with his body‚ barring armoured police vehicles entry to the Holy Trinity’s grounds‚ he prayed.

“I prayed harder than I had prayed in my life. Mainly my prayer was that his brakes were good.”

Following the tense incident Pugin continues to pray for peace.

Amused by a student who asked if he knew what ‘trending’ was‚ Pugin was tempted to lie and say he did not‚ he quipped with his intimate audience.

“But since I have done a little trending in the last week‚ it has provided me with the platform to say things that can be heard … and I would like to say fees must fall peacefully.”