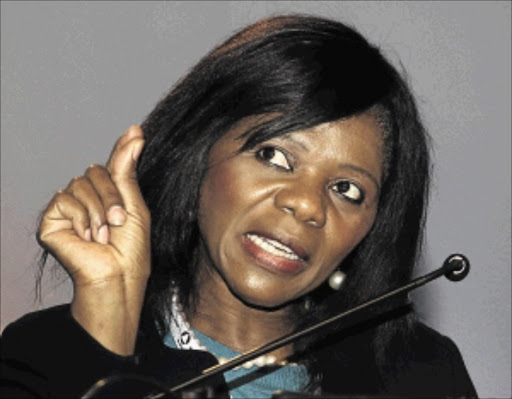 Public Protector Thuli Madonsela wants to know from Des van Rooyen whether two people he appointed as advisors during his brief stint as the country’s finance minister had tried to influence a government deal.

This question is contained in a letter that the Co-operative Governance and Traditional Affairs Minister attached to his court papers which were filed on Thursday‚ in his bid to prevent the Public Protector from releasing her report into alleged state capture. Madonsela was due to release the report on Friday‚ the last day of her seven-year non-renewable term as Public Protector‚ but could not as Van Rooyen and President Jacob Zuma launched urgent applications before the High Court in Pretoria seeking to prevent publication of the report.

Zuma’s application will be heard on Tuesday.

In the letter from Madonsela – which Van Rooyen attached in his court papers — she mentioned that he frequently visited the Saxonwold residence of the Gupta family in Johannesburg.

The letter said there were allegations that upon taking on the role of finance minister for four days in December 2015‚ Van Rooyen had arrived at the National Treasury with several advisors‚ which included Ian Whitley and Mohammed Bobat.

The letter said the two were aligned to the Gupta family.

The letter also said that Van Rooyen appointed Whitley and Bobat to the National Treasury without proper procedure.

“Either Mr Whitley or Mr Bobat‚ under your direction or control‚ asked a member of the National Treasury for information on the SAA Airbus swap deal‚ amongst others‚” the letter read.

In replying to allegations that the advisors might have asked for information on the SAA Airbus swap deal‚ he said: “I am not clear why (if this did indeed happen) asking a member of the National Treasury for such information leads you to draw negative inference against me.”

“Kindly also provide evidence you relied on to support your adverse findings that such persons were acting under my control or direction‚” Van Rooyen said in a reply that he attached to his court papers.

In his application‚ Van Rooyen said the Public Protector had denied him an opportunity to be heard and to question witnesses who had appeared before her.

The High Court in Pretoria did not deal with the content of his affidavit on Friday‚ as it postponed the application until November 1 to allow a number of opposition political parties to intervene.