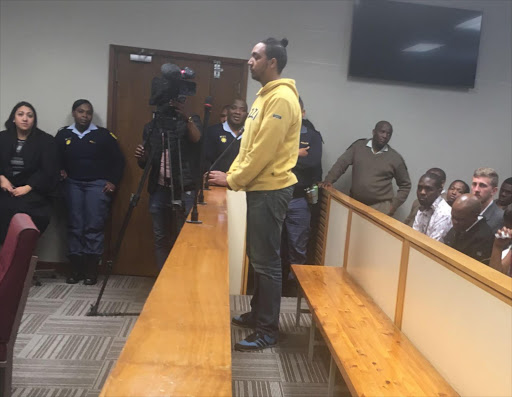 Byron Dick looked bewildered when the charges against him were read out in court — attempted murder‚ arson‚ public violence.

The 26-year-old student‚ wearing his hair in a man-bun and dressed in a yellow hoodie‚ appeared in the Bellville Magistrate’s Court on Thursday for allegedly taking part in the torching of a security control room at the Bellville campus of the Cape Peninsula University of Technology.

Three security guards‚ feeling threatened by protesting students who had surrounded the building‚ were trapped in the burning office and left for dead in the early hours of Wednesday morning.

A supervisor came to their rescue‚ pulling them free. One of the guards had lacerations on his head after being struck by a stone. All three were treated for smoke inhalation.

Dick will remain in custody until his next appearance on October 20. He was supported by about 40 students who gathered at the court and watched closely by police in the dock.

He appeared startled by the crowded public gallery and briefly spoke in barely audible Afrikaans when questioned by the court.

A #FeesMustFall leader told TMG Digital outside of the court that Dick had resisted their previous efforts to recruit him into their ranks at CPUT.

Some of the 12 students who were arrested after the campus violence are being held at Pollsmoor Prison.

University spokesman Lauren Kansley told TMG Digital that the main administration building and the security office at the campus had been torched during the incident on Wednesday morning.

Meanwhile‚ 36 University of Fort Hare students were due to appear in the East London Magistrate’s Court on charges of public violence on Thursday.