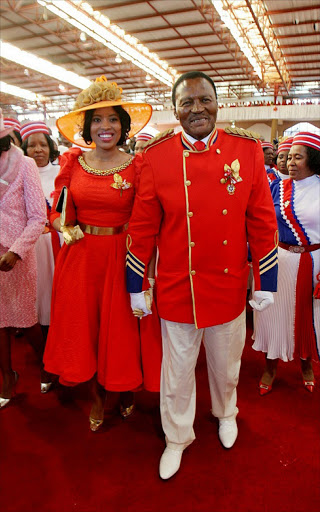 This after Modise's first wife Mirriam, also known as Mmapoloko, obtained a court order to remove her belongings from the church's headquarters in Zuurbekom, southwest of Johannesburg.

Mmapoloko, 64, went to court to seek relief after she fled the property - which also houses the family's home - in April following running battles with Modise's second wife Pearl Tafu, also known as Mmamohau.

As Mmapoloko arrived in Zuurbekom with at least seven empty removal trucks, a number of police officers and armed Red Ants security personnel, a large crowd of the church's congregation that supports Tafu, 30, was also waiting.

In a dramatic turn of events, the rowdy crowd turned on Sowetan photographer Thulani Mbele and assaulted him for taking pictures of the officers as they stripped the houses empty. Stuff such as furniture, carpets and sewing machines were removed.

The crowd, which was earlier overpowered by the Red Ants after trying to block them from executing the court order, grabbed Mbele, pushed him around and ordered him to delete the pictures he had taken. "Don't just delete, format that memory card," screamed one as Mbele was bundled into a police van for safety.

As the officers continued to load the goods onto the trucks, the crowd, made up of mainly young congregants, continued to shout and swear at them. "We are not afraid of dying. They can't come to our church and do as they like," one church member said.

Two hours after the police and security officers arrived, the laden trucks left the premises with Mmapoloko's belongings.

The church's security guards at the gate said Tafu was not home at the time of the raid as she was attending a meeting in Pretoria. She could not be reached for comment yesterday.

Mmapoloko's lawyer Simon Seete, who was at the scene, said: "The church is not above the law. Taking these items is by the book."

Modise, who led the 3.5million- strong church after inheriting it from his father Frederick in 1998, died in February this year.