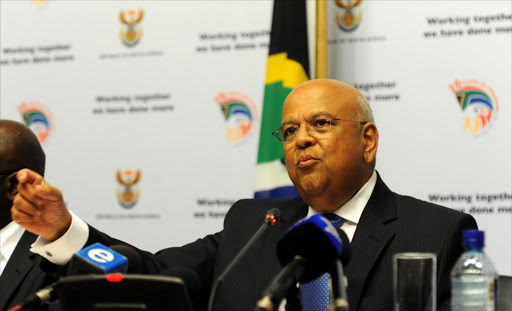 Pravin Gordhan could soon lose his job as Finance Minister after he was criminally charged - that is if the ANC follows its resolutions.

At its elective conference in Mangaung in 2012, the ANC adopted a resolution that those in its ranks who are criminally charged should resign to clear their names during their cases.

Former transport minister Sbu Ndebele - whose case was being dealt with by the party's integrity committee - was the latest senior ANC leader to resign as he faces corruption charges.

The National Prosecution Authority's (NPA's) announcement yesterday that Gordhan and his two former colleagues at the SA Revenue Services (Sars) would be charged solicited condemnation from political parties, including ANC ally SA Communist Party, while sending the rand crashing.

The charges came 15 days before he delivers his medium-term budget speech and a day after he arrived back from a road trip in the US to reassure investors.

ANC spokesman Zizi Kodwa has told Sowetan that the party would meet urgently to consider the implications of fraud charges by the NPA against Gordhan.

"There is a resolution from Mangaung to safeguard the core values of the ANC. A number of senior comrades have been asked [to resign]. Many of them have followed their conscience without being asked," Kodwa said.

"But the ANC, given the seriousness of the accusations against him, will be meeting urgently to discuss the way forward ."

Struggle veteran Frene Ginwala - who forms part of the integrity committee which must deal with Gordhan's charges - said it was too early to comment as they didn't have details of the case.

Gordhan's future is hanging in the balance after the NPA announced yesterday that he, former Sars commissioner Oupa Magashula and former Sars deputy commissioner Ivan Pillay would be charged with fraud, relating to Pillay's early retirement payout. Gordhan is facing two counts - the extension of Pillay's contract and fraud.

The three are expected to appear in the Pretoria Regional Court on November 2. But it looks like Gordhan is not going anywhere. Yesterday, he said he will cooperate with the investigation although it was politically motivated.

"This is a moment where all South Africans need to ask whose interests these people in the Hawks, the NPA and the NDPP are advancing. Where do they get their political instructions from and for what purpose," the Treasury said.

The SACP said the charges were designed to remove Gordhan from the ministry and take control of it - because Treasury was fighting corruption and state capture.

Without mentioning President Jacob Zuma by name, the SACP reminded him that he was once a victim of state resources being used against him for political gains.

"The timing has an eerie similarity with the events that unfolded between 2003 and 2007, when the timing of another prosecution against a senior politician appeared to be coordinated around a political calendar," the SACP said.

The Presidency said in a statement yesterday: "Our society is anchored on the rule of law as well as fair and just judicial processes. Minister Gordhan is innocent until and unless proven otherwise by a court of law.

"This is a fundamental pillar of our constitutional democracy and the rule of law." - Additional reporting by Penelope Mashego and TMG Digital