Malema had planned to apologise to 'Khwezi' personally 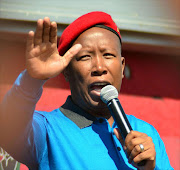 EFF leader Julius Malema had plans to meet Fezeka Kuzwayo and apologise to her personally.

"I've apologised to Kuzwayo and she passes on at a time when we were actually preparing to go and see [her] in person to apologise to her," Malema said yesterday.

He said he now planned to extend the apology to Kuzwayo's mother.

"I will never have a problem apologising to her mother.

"That's how far I'm prepared to go and send condolences to the family and to repeat my public apology.

"I wanted to apologise to her. We were working towards visiting her," Malema added.

When he was president of the ANC Youth League in 2009, Malema had controversially said Kuzwayo had had a "nice" time with Zuma.

"When a woman didn't enjoy it, she leaves early in the morning. Those who had a nice time will wait until the sun comes out, request breakfast and ask for taxi money," Malema told students at the Cape Peninsula University of Technology at the time.

"In the morning, that lady requested breakfast and taxi money."

Malema publicly apologised to Kuzwayo in 2009 following a ruling against him by the Equality Court. Sonke Gender Justice Network had taken him to court over his utterances.

Malema yesterday would not be drawn on calls for Zuma to apologise to Kuzwayo.

"I don't want to use Khwezi's death for cheap politicking or publicity or to sell newspapers.

"It's a painful thing for anyone to lose a child and should never be seen as an opportunity for commercial or political purpose." - Bongani Nkosi