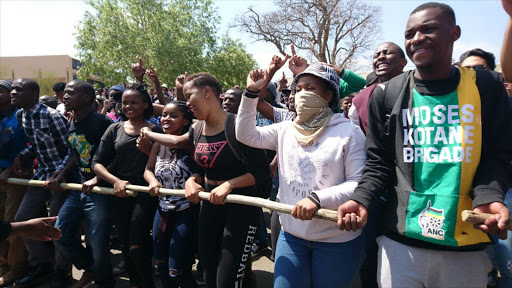 The cost of destruction to property as a result of student unrest has reached R600 million‚ says Higher Education and Training Minister Blade Nzimande.

The minister said this was destruction that the country could not afford‚ saying this huge cost — and the first casualty of the fees unrest — made the call for the protest action to end even more urgent.

He said for poor universities‚ it is government that will have to foot the bill of destruction. This is unfortunate because “it means we will have to take money that was supposed to do new things to assist students to repair (the damage)”.

He reiterated his conviction that there was a political element behind the protests‚ saying the he could not understand how a majority of students could be held at ransom and misled by a minority of students.

The minister said people who continue to protest and destroy property in the name of poor were lying‚ as destruction of something already built pointed to something else.

Nzimande blamed the protests on what he said were ultra-left formations and singled out the Economic Freedom Fighters (EFF) as amongst those behind the protest.

“This is an anti-ANC government agenda by those who cannot win power through the ballot...there is no reason to be protesting‚” he said.

Nzimande said the death of a cleaner at Wits University was what he had feared all along.

“Some of these elements do not respect life and want this to happen...I am working towards ministerial consultation...I want to bring (stakeholders)‚ including students‚ under one roof‚ to say let us end this mayhem‚” he said.

Nzimande appealed to parents to stand up to assist the situation.

The minister was speaking in Pretoria on Tuesday after meeting with the newly convened National Board of Convocations and Alumni‚ which has also thrown its weight behind the higher education and training’s announcement of fee increases of up to 8% next year for those who could afford to pay.

A group of students descended on the department’s head offices on Francis Baard street where the minister was addressing the media‚ bringing their call for free education to the minister’s doorstep.