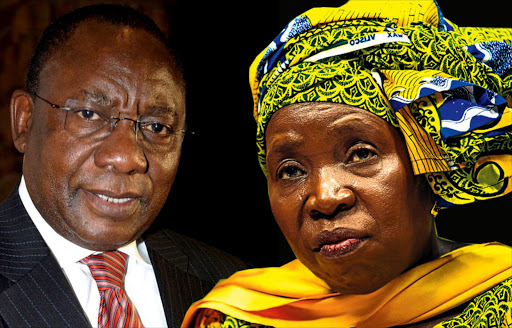 The YCL, the SA Communist Party's youth wing, yesterday intensified the ANC succession battle, giving the strongest indication that the communists wanted Zuma to be succeeded by Ramaphosa instead of the African Union Commission chair Nkosazana Dlamini-Zuma.

The YCL weighed in on the debate, raising the ire of the Umkhonto weSizwe Military Veterans Association (MKMVA) and ANC Women's League (ANCWL), both of which the YCL attacked for backing Dlamini-Zuma.

"As the YCLSA we don't have confidence in any candidate that is being proposed by the ANCYL, ANCWL, the MKMVA . [they] are part of those who are liquidating the ANC, part of those that are arrogant to our people."

MKMVA chairman Kebby Maphatsoe, who Dlelanga accused of running away from an MK camp, said the fact that the YCL discussed ANC structures showed their "political bankruptcy" and was proof that they did not have a programme for young people.

He said the YCL was being used by "other people" to attack MKMVA. "They are the youth league of the SACP. What they are saying is consistent with their national leadership," he said.

ANCWL secretary-general Meokgo Matuba dismissed the YCL, while standing firm on the league's decision to endorse a female candidate.

"They must not annoy us. They must focus on their organisation. We don't know what communists are doing," she said.

Meanwhile, the SA Transport and Allied Workers Union (Satawu) and the Police and Prison Civil Rights Union (Popcru) warned yesterday against Cosatu taking a position on who should succeed Zuma.

Satawu general secretary Zenzo Mahlangu said: "We wish that the federation should concentrate on building its own structures and building affiliates; a better Cosatu can offer better support to its members and be in a better position to bargain with alliance partners."

Popcru general secretary Nathi Theledi said the succession debate was divisive and Cosatu should not engage in it.