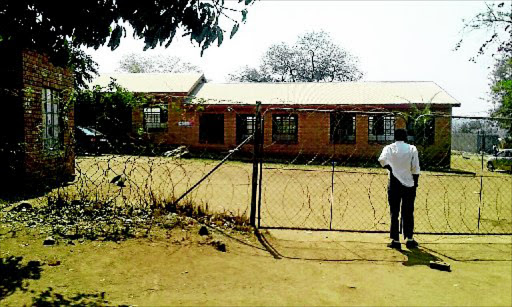 Tshilala Secondary School outside Thohoyandou, Limpopo, where a 14-year-old bit off both lips of her 13-year-old classmate on Wednesday afternoon in a fight allegedly over a tin of shoe polish. Photo: Ndivhuwo Mukwevho

A fight over a tin of shoe polish left a Grade 9 pupil at a Limpopo school without both lips after they were allegedly bitten off by her classmate.

The two Grade 9 pupils at Tshilala Secondary School near Thohoyandou allegedly fought over a tin of shoe polish inside a classroom when the 14-year-old bit off both lips of her 13-year-old peer, which left the entire school in shock.

The 14-year-old allegedly chewed the lips but spit them out when she realised teachers and pupils had gathered. Both teenagers are residents of Dumasi village, near Thohoyandou.

Despite efforts by principal Khamusi Siobo to rush the victim to Tshilidzini Hospital, doctors were unable to stitch the lips back together.

The incident, which happened on Wednesday, left pupils and teachers believing that the 14-year-old was under the influence of Satanism as they do not believe a normal person could commit such an act.

The victim will today be transferred to the Polokwane Provincial Hospital as doctors are still trying to figure out what they will do to fix her lips.

The victim's angry parents are yet to open a criminal case but told Sowetan that they were disappointed that the alleged perpetrator's parents were yet to visit them or try to make contact.

The victim's best friend and classmate, also aged 14, who tried to intervene during the fight, said: "I no longer feel safe at school as I fear that the same incident might also happen to me. What I witnessed will stay in my mind for the rest of my life. It was like I was watching a horror movie.

"I think we all need serious counselling in order for us to forget about what happened to our classmate".

A teacher who also witnessed the incident said: "We're now even afraid to go to classes to teach after the gruesome incident. It'll take months for us to forget about the whole ordeal."

The teacher continued: "Personally, I think the young girl did what she did under the influence of something as a normal person cannot do something like that.

"A normal person cannot bite off someone else's lips in the manner she did."

Thohoyandou police spokesman Avhafarei Tshiovhe said no case had been opened yet.

Siobo is yet to decide on what will happen to the two pupils as he is scheduled to meet their parents today.

Peggy Mulaudzi, a social worker in the Vhembe area, said the entire school, including teachers, would need professional counselling in order to forget about the ordeal and be able to concentrate on their school work.

"After witnessing incidents such as this pupils, especially the ones in Grade 9, must be provided with special counselling as this ordeal might stay in their minds for the rest of their lives," said Mulaudzi.