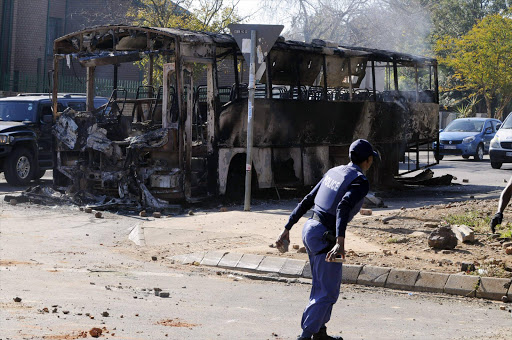 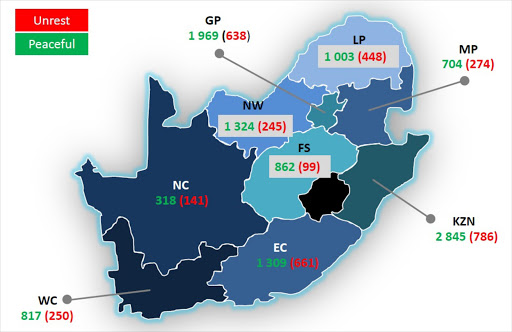 Violence during public protests has surged‚ taking the police’s focus away from dealing with serious crimes.

Protests are his “biggest problem”‚ acting national police commissioner Khomotso Phahlane said on Monday‚ speaking on radio 702 on the John Robbie show about the “notable” increase in unrest-related incidents.

“My biggest problem is diversion from normal policing. If you look at public violence‚ the unrest which has been on the increase and it is mainly people trying to express their concerns with authorities… That in itself is taking the police away from what they are supposed to be doing: dealing with serious crimes.

“If we can minimise that… People must use the existing structures to voice their issues and voice them responsibly within the confines of the law. [That] will allow us to focus on the core business of policing and fighting crime‚” he said.

According to the crime statistics‚ KwaZulu-Natal recorded the highest number of violent protests in the last financial year with 786 incidents reported.

The Eastern Cape recorded the second highest number of violent protests with a total of 661 reported cases.

Limpopo followed with 448‚ Mpumalanga with 274 and the Western Cape with 250 recorded violent protests.

Lizette Lancaster‚ manager of the crime and justice hub at the Institute for Security Studies (ISS)‚ said that in most cases‚ the root causes of violent protests stem from issues such as severe inequality and poverty.

“In most cases‚ people have a high expectation of response and often people that mobilise feel that there is no other way to address their grievances‚” said Lancaster.

She added that some of the key triggers that determine the escalation or de-escalation of a protest include: failed infrastructure and services‚ the media’s interest in the issues‚ police action and response‚ low level of access to resources‚ trust and distrust of official authorities‚ highly motivated individuals and officials’ response to the violence.

Some of the notable violent protests the country has seen this year include:

-Hammanskraal – where two people were killed and six critically injured in an eviction protest in May;

-Vaal University of Technology – where students protested over the suspension and arrest of other protesting students;

-Vuwani in Limpopo – where residents destroyed schools protesting over the new demarcation of their area.

There were also reported incidents of violent protests related to mayoral and councillor nominees before the start of local government elections last month.

Municipal IQ‚ a specialised local government data and intelligence organisation that collects data on service delivery protests‚ said in May that 2016 was on track to be a record for protest action.

“If sustained at the same rate as the past four months‚ major service delivery protests in 2016 will reach a new peak level‚” the company said.

According to its data‚ this year had – up to April 30 – seen 70 protests compared to a total of 164 for 2015‚ and 191 for 2014. The protests used in its study are primarily against councillor candidates (a political issue) while demarcation (a national decision‚ like that of Vuwani) and industrial relations cases are not included on the Municipal Hotspots Monitor.

“Many of these protests have taken place in informal settlements and under-developed areas where service delivery remains a major challenge‚” Municipal IQ MD Kevin Allan noted.

Meanwhile‚ Phahlane said he was worried about the increases in cases of contact crime — which include murder‚ attempted murder and assault with the intent to inflict grievous bodily harm — in the past year.

“I have to be worried as a South African‚ particularly when are not able to arrest the increase in the incidents of contact crimes‚ but I am encouraged by the work police have done‚” he said. “We believe what we have in place will take us a long way in reversing the situation.”

The Institute for Security Studies last week said better use of crime intelligence‚ with support from experienced detectives and forensic capacity will go far in reducing the crimes that were on the rise. “A good example is the success in tackling truck hijacking following the appointment of a dedicated task team.”