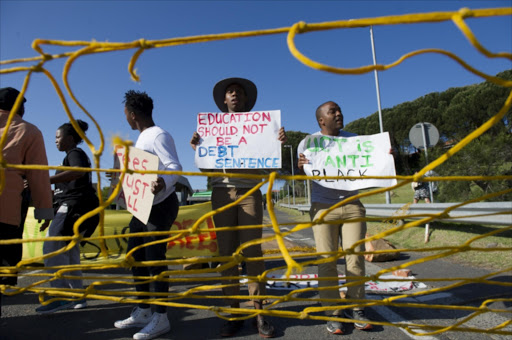 UCT students during a protest over an increase on the tuition fees. Picture Credit: Gallo Images

The University of Cape Town (UCT) is proposing that students who come from homes which earn R500 000 a year should pay increased tuition fees in 2017 while poorer students are exempted from the hike.

Vice-chancellor Dr Max Price put the proposal on the table in an emailed letter to staff‚ students and alumni on Sunday evening.

Proposed fee increases have been greeted with protests‚ and sporadic incidents of violence‚ by students on campuses across the country.

Price said‚ while there was still huge uncertainty over fee increases‚ no student who was academically eligible should be turned away for financial reasons.

“UCT‚ in line with most other universities‚ as confirmed by a report of the Council for Higher Education‚ has determined that an 8% increase in revenue is required to balance the books. This is about 2 percentage points higher than inflation. It is higher because: the salary bill is going up above inflation (including the costs of insourcing); certain costs such as electricity (R76-million of our budget) and other utilities are increasing at nearly 10%; and all our imported purchases – such as library subscriptions‚ electronics and software‚ laboratory consumables – have been escalating at double-digit rates due to the weakening exchange rate. In short‚ we need an 8% increase in revenue if we are to conduct our activities at the same level in 2017 as we have in 2016‚” said Price.

Government has postponed an announcement on fee hikes‚ pending further consultation with all of the affected parties.

“Where should the increased revenue of 8% come from? The universities would certainly prefer the majority of this‚ if not all of it‚ to come from government‚ in recognition that there has been a chronic underfunding of higher education‚ which has resulted in the fees being increased over a number of years to what are unaffordable levels for many. However‚ we also recognise the difficulty of the present economic situation‚ the risks of credit rating agency downgrades and the competing needs for public funding‚” said Price.

UCT suggested a compromise. If funding could not be found from government or business‚ the suggestion is to keep fees the same for students from households‚ “earning below ‚ say‚ R500 000 per annum‚ and allow universities to increase fees in real terms for students from higher-income households above that threshold.

“There is no good reason why wealthy students should benefit from reducing real fees for a further year‚” he said.

Price said that a compromise would still require additional funding from government to compensate for the loss of the increase from those students below the threshold.

“But it will be less than would otherwise be required to cover all students‚ and will enable the universities that can charge higher fees to do so. This is needed so that they can supplement their more expensive financial aid systems. If there is no additional funding from government‚ we‚ the vice-chancellors collectively‚ see no way of proceeding without an inflation adjustment to the fees. However‚ the compromise suggested above can completely address the affordability issue‚” he said.

He said UCT would act firmly against students who threatened disruptions and violence over tuition fees.

Price will present the proposal to the Commission on Higher Education on September 6. – TMG Digital