Scores of children hurt as bus rolls down embankment in KZN 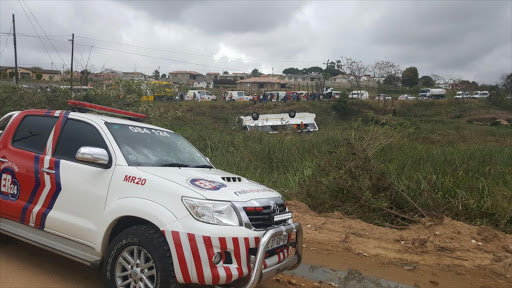 KwaZulu-Natal emergency rescue services on scene of a bus crash on the Umbumbulu road towards Adams Mission‚ south of Durban. ER24's Rusell Meiring said at least 40 children were injured as a bus rolled down an embankment. He said there were various injuries among the children aged between 15 and 18. Picture supplied by ER24

At least 50 pupils were injured after a school-bus rolled down an embankment in KwaZulu-Natal on Friday.

According to emergency medical service ER24‚ paramedics arrived on the scene in Umbumbulu and found the bus lying on its roof.

“Most of the children had already climbed out of the vehicle and had made their way up to the roadside‚” ER42 said.

The 50 patients had sustained minor to moderate injuries.

“Fortunately‚ no fatalities have yet been reported on the scene‚” ER24 added.

The children – aged 15 to 18 — were treated by paramedics from various emergency services and later transported to various hospitals for treatment.

“The exact cause of this collision is not yet known but local authorities were on scene for further investigations‚” ER24 said.

Rob Byrne posted an image of the bus on twitter.

<p =""> </p><p ="">Eleven South African National Defence Force (SANDF) members were killed in when a bus rolled at Clarens in the Free State last Friday.</p><p ="">The victims were all from the Department of Defence’s Mobilisation Centre in De Brug‚ Bloemfontein. The driver evidently lost control of the bus that was transporting 42 SANDF members‚ and it rolled down an embankment in the Golden Gate Reserve near Clarens. — TMG Digital</p><p =""> </p><p =""> </p><p =""> </p>
Next Article