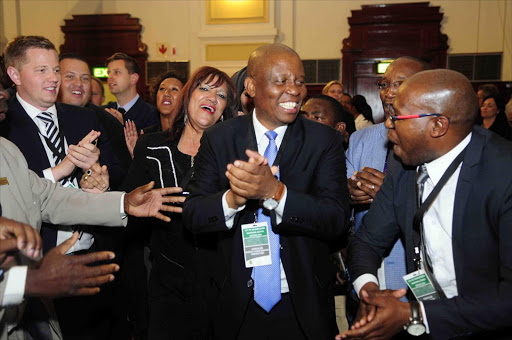 DA's Herman Mashaba celebrating his victory after being elected as the new Mayor of Johannesburg. Photo Thulani Mbele. 22/08/2016

City of Johannesburg mayor Herman Mashaba waisted no time telling the city's employees that anyone who intent to be corrupt should make way for professionals.

Mashaba wrote a letter to all employees a day after he was elected, informing them that during campaigning his party made a commitment to root out fraud and corruption in the city and "we trust that you'll help us in this regard".

"Those intent on being corrupt must make way for the professionals among us who have answered the call to serve.

"My expectation of you is that you will strive to reach even higher levels of professionalism in serving our people." Mashaba's letter reads.

Yesterday, Mashaba confirmed the letter, saying his message to the employees was to tell them that he needed to work with people who have the skills manpower to serve the people, not their political parties.

Will our new mayors downgrade to wheels with less bling?

"I want to bring a new culture of professionalism. Our human resources will do a skills audit of all employees to check if they are qualified for what they are employed to do."

He said that did not mean he would fire people but they may be moved to other departments or even put on training.

Mashaba was elected mayor on Monday evening and the city is now run by the DA. He's expected to reveal his mayoral committee members council (MMCs) public tomorrow.

All the employees who are political appointees are to lose their jobs, but their bosses will probably be on the opposition benches in the council.

Meanwhile, City of Tshwane mayor Solly Msimanga was expected to unveil his 10 MMCs yesterday but the announcement was postponed.

Msimanga's acting spokesman Matthew Gerstner broke the news to a group of journalists who arrived at the metro's offices in Centurion. Apologising to the reporters, Gerstner said the scheduled briefing coincided with Msimanga's address at another event in the city.

Msimanga and his political party, the DA, have received stinging criticism for allegedly appointing mostly white councillors to the committee.

Only two of the 10 members, Mandla Nkomo and Ntsiki Mokhotho, are black - and five are white males. One member, Bruce Lee, is an Asian of Chinese descent. Another criticism against the committee is that it is 70% male, with only three women - Mokhotho, Marietha Aucamp and Mare-Lise Fourie.

On Tuesday, the DA in Tshwane confirmed the MMC list to the media, but yesterday Msimanga told a radio station he would release his official MMC list tomorrow.