Zuma has no powers to stop investigations into Pravin Gordhan: Presidency 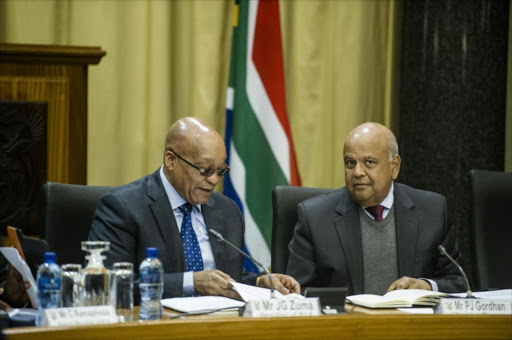 President Jacob Zuma has “full support and confidence in the minister of finance”‚ but lacks the “powers to stop any investigation” into him.

“The Presidency has noted the concerns expressed by individuals and organisations in society about the reported investigation by the Directorate for Priority Crime Investigation (Hawks) involving…Pravin Gordhan as well as other former South African Revenue Services (Sars) officials‚” the Presidency said in a statement.

This came as Gordhan refused a demand to present himself on Thursday to provide a warning statement to the Hawks in relation to the unit’s probe into an alleged rogue intelligence unit at Sars – said to have been formed when he was commissioner.

Zuma also “emphasises the fact that the minister has not been found guilty of any wrong doing”‚ the statement said.

“The Presidency wishes to also emphasise that President Zuma does not have powers to stop any investigations into any individual/s.

“Our constitutional democracy‚ the strength of our state institutions and the effectiveness of our courts in upholding and protecting rights is our guarantee of justice and fairness.

“The negative effect of these matters on our economy‚ personal pressure on the individuals affected as well as the heads of institutions‚ however disturbing‚ cannot be cause for the president to intervene unconstitutionally.

“The broader speculation linking these investigations to government and state-owned institutions are equally unhelpful and they are also false and misleading.”

Zuma on Thursday departed for Kenya to attend 6th Summit of the Tokyo International Conference on African Development. – TMG Digital