Councillor wants 10 tuk-tuks in every ward in Cape Town 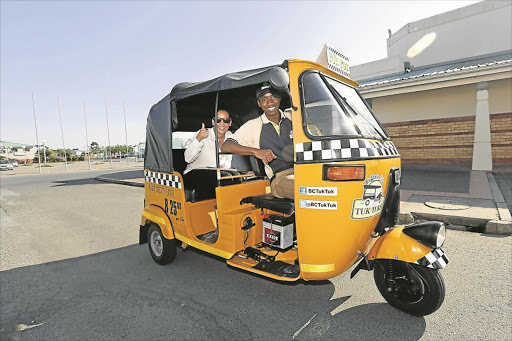 A Congress of the People councillor on Thursday called for “at least 10 tuk-tuks to operate in every ward” in Cape Town.

Farouk Cassim said the opportunity is there considering that it is the “the most traffic-congested city in South Africa”.

Cassim said the city’s transport authority’s tender issued in April only contained a provision that “successful licensees will be permitted to operate 80 tuk-tuk vehicles in a three-kilometre radius”.

Cassim said the “fact that 95% of public transport is used by poor people provides compelling evidence that public transport cannot match the convenience of travelling in a private vehicle‚ congestion and pollution notwithstanding”.

“People are reluctant to walk to a transport location and wait or ride a short distance and then change to another bus‚” he said‚ adding that his proposal for 10 tuk-tuks in every ward “would have facilitated a door-to-door public transport service”.

“What is on offer must provide a real incentive to do something constructive about reducing greenhouse emission and taking cars off the road.”

Cassim‚ by way of example‚ said tuk-tuks were used to good effect in the Indian capital.

“In New Delhi‚ the most traffic-congested city in the whole world‚ it is the tuk-tuk that successfully ferries passengers to the metro‚” he said.

“Without the tuk-tuk‚ New Delhi will grind to a standstill.” – TMG Digital