Tumi Morake speaks out about her rape ordeal 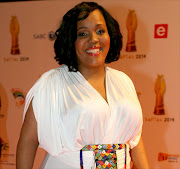 Following a highly-publicised silent rape protest during President Jacob Zuma’s speech earlier this month‚ comedian Tumi Morake recently recounted her own rape ordeal‚ saying it was how she broke her virginity.

Speaking to The Citizen‚ Tumi opened up about the acutely distressing incident which occurred when she was younger.

“I was raped but never spoke about it till now‚ and it is probably because of this Khwezi thing‚” she told the local publication.

“But that was how I lost my virginity.”

According to the report‚ Tumi explained that the ordeal affected her for a year and a half‚ before she got back on her feet. In addition‚ she revealed that going through such a traumatic experience has equipped her with the necessary strength she needs to achieve whatever she has set her mind on.

“I have an erection every time I walk on stage‚ a big throbbing erection because this was the one thing that could have ended me‚ but instead gave me the strength to work harder.”

Tumi opening up about her own experience comes in the wake of a national debate on rape‚ which erupted following four women protesting against rape during President Jacob Zuma’s speech at the IEC result centre two weeks ago.

The four women‚ clad in black‚ protested by holding up sheets of paper saying “10 years on“‚ “khanga“‚ and “Remember Kwezi“- in reference to the woman who accused Zuma of raping her in 2006. He was acquitted of the rape charges.