Alcohol abuse is killing our future 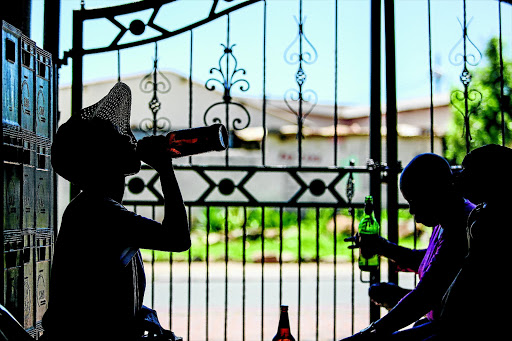 Excessive consumption of alcohol is destroying lives. A lot of people turn to liquor to avoid confronting reality in their lives. Photo: Moeletsi Mabe

Last week, I visited a friend at his flat in Yeoville, Johannesburg.

Sitting on his balcony overlooking Rockey Street, which I used to call home back in 1995 when I first arrived in the city, I could not help observing how Yeoville, like Jozi itself, has changed.

This transformation was immediately noticeable to me as we sat there, talking business.

I noticed schoolchildren in uniform - it was a weekday after all - roaming the street when they were supposed to be in school.

I suddenly realised that these children kept congregating around a stall, where they would buy something, disappear, only to return a few minutes later. What the hell is happening? I wondered.

"I don't know who's going to stop this man from selling booze to kids," my friend observed, as if in answer to my curiosity.

I had not seen any bottles or cans of booze exchange hands - until my friend mentioned that the man was selling sachets of vodka and brandy to these children. This came as a shock, for a number of reasons.

First of all, I did not know, until then, that one could buy spirits in sachets. Second, spirits are potent even to a seasoned adult drinker. Third, the kids were underage and shouldn't have been allowed to buy alcohol.

My friend said police were aware of the trade, but because the vendor paid them bribes, they simply looked the other way.

Later, I casually asked one of the boys why he was drinking - I said this with a mild smile as I was in no position to be stabbed or shot "for interfering". The youngster said he was bored with life, and booze was just "soooo cool".

It is this "cool" element that I want to address. For a long time, black people were not allowed to drink "white people's liquor" (beer, wine and spirits). We had to be content with umqombothi.

By the time government allowed us to drink this stuff we took to it with alacrity - and immediately attached the "cool" element to it.

When a beer called Schafft was launched around the time of the 1976 Soweto uprising, the street philosophers whispered, "Do you know that Schafft stands for? Soweto Children Hate Afrikaans For Future Times?!"

Then another creative brain analysed that Castle Lager stood for "Coloureds, Africans, Sit Together, Let's Enjoy" - and lager stood for "Let Africans Get Equal Rights".

Because, as a schoolboy, I was doing the Van Rensburgs's gardens in the suburbs to earn extra cash, I noticed that white people drank something called KWV brandy.

I duly relayed this important piece of intelligence to the brothers in the township, and o ne of the guys said it stood for " Kaffir Wil (nie) Verstaan (nie) . One day we will understand, my brother".

As we grow up, our memories play tricks on us. When we remember something, we immediately think nostalgia is causing us to make things up - which is what I thought was happening as the acronyms I've just mentioned came to my mind some time ago, and I scribbled them down.

I was, therefore, relieved to see them mentioned in Joseph Lelyveld's excellent book Move Your Shadow: South Africa, Black and White.

In one of the chapters, Lelyveld shows how "white man's liquor" was used to not only pacify blacks, but also to strip them of their dignity - gradually.

The colonialists who came up with this strategy are long gone, but the effects manifest in crime statistics, where 65% of murders start off as assaults stimulated by alcohol or drug abuse.

I won't be surprised if Tefelo Dikole, currently in court for murdering six-year-old Kutlwano Garesape of Jan Kempdorp settlement, Northern Cape, last Friday had consumed alcohol when he did this.

It's time to reflect soberly on the scourge. Don't sink into that gin in the belief you will win. Wisdom and self-actualisation ain't in that bottle. Never was; never will be.