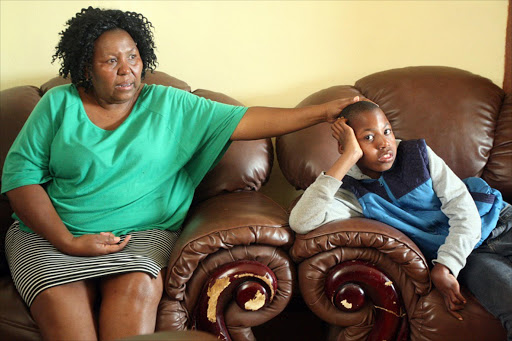 Vosloorus, July 31. Prudence Molefe with her son Kagiso Molefe,11, who allegedly suffered a permanent injury when he was born. He allegedly fell from the bed after his mother gave birth to him at Natalspruit Hospital in 2005. PHOTO:ANTONIO MUCHAVE/SOWETAN

A boy who became brain damaged after he fell during birth has been awarded R30- million in damages by the North Gauteng High Court.

It all begun 11 years ago when the boy's mother, Prudence Molefe, 54, was moved to a labour ward after nurses at the Natalspruit Hospital had confirmed that she was ready to give birth.

They put her in a bed and opened her legs wide open and left her alone in the ward.

"The baby sprinted out of me and fell on the ground and from there I heard a very faint cry on my right side of the bed and I could not even see him. There was no one in the ward, I was the only one," she said at her home in Vosloorus, Ekurhuleni.

"I thought my child was dead. I was in pain and I thought I carried this child for nine months for nothing. I thought it would have been better to abort the child than go through that pain.

Molefe was relating the story of the negligence when she gave birth to Kagiso, which left him brain damaged and suffering from cerebral palsy.

"They came running and exclaimed: 'Yoh! The baby has fallen on the floor'. They told me that they were busy in other wards," she said.

Molefe told Sowetan that the journey of raising her son has been a difficult one.

"He grew up in hospital. Every month he was being admitted to hospital for this and that, even if he had flu you needed to take him to hospital because he would get too sick," she said.

Kagiso was epileptic from the first month and still is.

"He only started sitting on his own when he was three years old. He can speak but his speech is not clear. He started speaking when he was seven and he only uttered two words, which were 'mama robala' (mama sleep).

"I started potty training him this year but when he has a running stomach he wears a diaper," Molefe said.

When we visited the family we watched Molefe help Kagiso to pee in a bucket.

Molefe said because of her son's condition she had to quit her job as a teacher three years ago to look after him.

Kagiso attends Felicitas School for the Physically and Intellectually Challenged, but Molefe said he constantly gets sick and has to go to a doctor and there was no one who could take him.

Molefe said with the money, which will be handled by a trust, she hoped to get a house that will be more suited to her child's condition - with a wheelchair ramp and a wheelchair-friendly toilet.

The family lives in a small four-room house that is difficult for Kagiso to move around in.