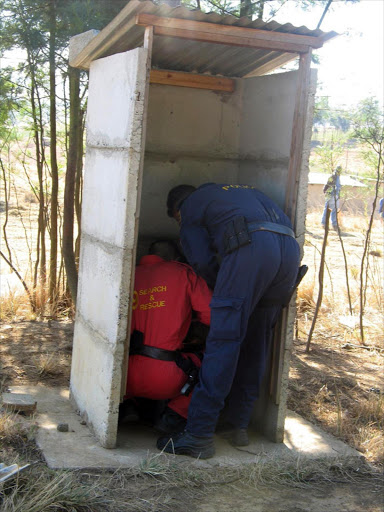 Residents of a Limpopo village have been forced to erect makeshift toilets as a backup after toilets supplied by the municipality became full.

The remote Keerom village near Marble Hall falls under the Ephraim Mogale municipality, which is one of the areas affected by a drop in water levels at Flag Boshielo Dam amid severe drought across the province.

Earlier this month, the national Department of Water and Sanitation released a drought alert warning that the dam would completely run dry should there be no rainfall by August this year.

The Sekhukhune district municipality also said in a statement that water rations would be implemented in local municipalities including Ephraim Mogale and Fetakgomo, adding that communities should use water sparingly.

Yesterday, residents from Keerom village said the water situation was so bad that contractors hired to drain out pit latrines were asking locals for water so that they could do their work.

Resident Mahlako Shalang claims the contractors came to their doorsteps asking them for water. "Where do they think we get water from? I don't understand why the contractor does not come with his own water because we also struggle with water here."

Shalang showed Sowetan a second toilet structure she claimed was erected after the one built by the municipality became full.

Shalang said communal taps in the area often ran dry, which meant that locals had to buy water from private suppliers costing them R500 to fill up a 500-litre water tank. She said they had lost hope of ever getting proper flushing toilets in the area because even maintaining pit latrines proved to be a hassle.

A few other houses in the area also seemed to have two toilet structures.

Another resident, Jankie Makweng, who also erected an extra toilet out of corrugated iron sheets also said water was scarce in the area.

"In order to get drinking water here you must pay, which is a struggle because most of us are also unemployed," Makweng said.

However, contractor Peter Maphutha denied that his workers ever asked villagers for water.

Maphutha said they used high- pressure machines and chemicals to clear out the toilets.

He said disgruntled people from different political parties were spreading rumours to drive their political agendas ahead of the local government elections next week. "We do not have a crisis. It is during elections and people want to sabotage the municipality," Maphutha said.

When contacted for comment yesterday, spokesman for the Ephraim Mogale local municipality Jan Phasha said the district municipality should comment on water issues.

However, spokesman for the Sekhukhune district municipality Willy Mosoma could not be reached for comment at the time of going to print yesterday.