Compassionate reader buys school uniform for a child in need 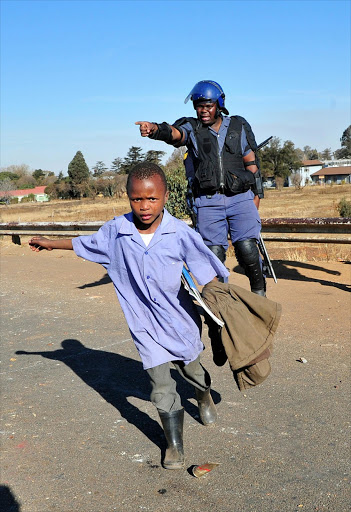 A Sowetan photo showing a frightened boy wearing torn gumboots and an old, oversized school shirt being escorted by a policeman during a service delivery protest tugged a reader at the heartstrings.

The boy was among dozens of pupils who were coming back from school when they were caught between stone-throwing residents of Sicelo informal settlement, near Meyerton and teargas-firing police on Thursday.

The community had blocked the R59 and the LJ Malia Street leading into the township in protest over service delivery.

However, it was the image of a little boy in ragged clothing carrying his books that touched an employee from Gauteng legislature's heart, who called Sowetan offering to buy the boy a uniform.

The man, who wanted to remain anonymous, spent almost R1000 on a uniform and a school bag.

Using the image from the article, Sowetan managed to track down Bokamoso "Tamatie" Mathibe, 7, to his uncle's two-room shack in Sicelo.

When Sowetan spotted him at the weekend, he was walking with two friends carrying a beer bottle which they were selling for R1.

He threw the bottle away and raised his hand in the air in excitement when he was shown the image.

Tamatie and his older brother have been living with their unemployed uncle, Piet Ramotete, and his girlfriend, Mabafokeng Pitso, since their parents died more than five years ago.

They, together with three other children, share the two-bedroom shack.

The family survives on R700 a month, which they get for two children who receive child support grants.

Ramotete gets piece jobs which earn him R80 on a good day.

They cannot get a foster care grant because they have no Identity Document.

"We are barely surviving because the little money we have can only buy essential items. When I buy food, then I can't buy clothes and when I buy clothes I have to sacrifice food.

"If we can get jobs or foster care grant our situation would improve greatly," Pitso said.

Bokamoso is a Grade 1 pupil at Michael Rua Primary School in Meyerton in the Vaal.

He has been wearing the gumboots to school for over two months.

His uncle got him the boots from someone who hired him for a temporary job. The boots have since developed a hole in the heels from being worn because Bokamoso does not have other shoes.