I was soaked in my mother's blood, says traumatised son 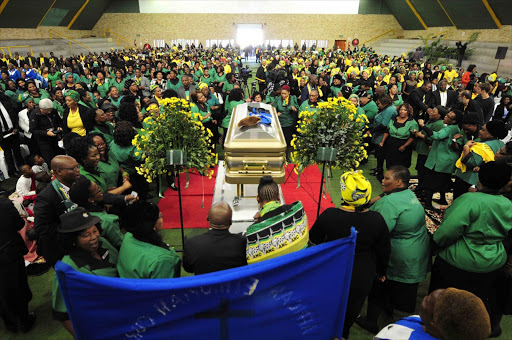 ANC women's league circle around the coffin of slained ANC ward candidate Khanyisile Ngobese. Ngobese was shot and killed on monday on Mandela Day while giving out blankets to the elderly in Ladysmith, Kwa-Zulu Natal. Two ANC ward candidates were killed this week in what many believe to be political killings. Picture Credit: Thulani Mbele.

When Zamakuhle Sibisi heard a volley of gunshots as he waited for his mother to deliver blankets as part of the 67 minutes for Mandela Day project, he exclaimed to himself that the gunman had indeed hit his target.

What he did not know then was that the target was his mother, Khanyisile Ngobese-Sibisi, the ANC Women's League secretary in KwaZulu-Natal's Ukhahlamba region.

She was also a candidate in ward 20 for next week's local government elections.

Zamakuhle told mourners at Ngobese-Sibisi's funeral in Ladysmith on Saturday that she had mentioned to him before the shooting that she no longer felt safe and was in the process of organising security for her protection.

"What I saw, seeing my mother shot like that . I didn't even know how many bullets [were fired]," Zamakuhle said.

He said he rushed to the scene of the shooting in Acaciaville after he was called by his mother's fellow ANC members who were with her last Monday.

After checking his mother's pulse, he moved her into the back seat of an ANC-branded vehicle.

He then sat in the driver's seat soaked in his mother's warm blood and rushed her to hospital.

Ngobese-Sibisi died from her injuries later that day.

ANC alarmed as another two councillor candidates murdered in KwaZulu-Natal

She had been shot eight times with an AK-47 rifle by gunmen travelling in a car.

Zamakuhle said he had pleaded with his mother to quit politics because she was no longer safe, but she had refused.

One of her comrades, Nonhlanhla Msomi, said Ngobese-Sibisi did not want to stand as councillor, but the party had persuaded her to accept nomination because of her qualities.

Ngobese-Sibisi was a community worker who ran a soup kitchen for poor children in the area.

A week earlier, ANC ward 15 candidate David Muzi Mazibuko was lucky to escape with his life after gunmen opened fire on him at his home in Peacetown.