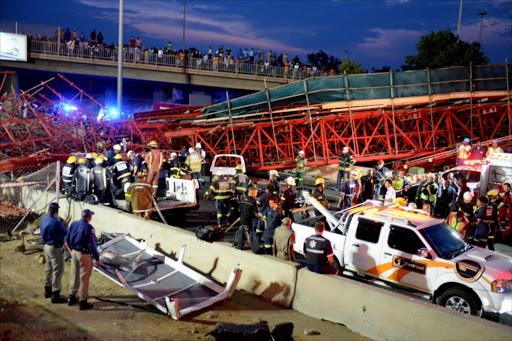 The commissioners heading the M1/Grayston Drive pedestrian and cyclist structural bridge inquiry will on Wednesday visit the site of the fatal collapse.

The collapse of the temporary bridge structure on Johannesburg’s M1/Grayston Drive last October led to the death of two people and injury to 19 others.

The Department of Labour set up the Section 32 Inquiry to uncover the causes for the collapse of the scaffolding work into the Grayston Drive Pedestrian and cyclist structural bridge. Lennie Samuel is presiding over the inquiry‚ assisted by Lesibe Raphela.

The commission’s visit to the site of the fatal accident‚ follows Murray & Roberts’ request to reconstruct the bridge‚ the department said in a statement.

The site has been under a prohibition notice by the Department of Labour following the collapse of the temporary structure.

At the commission hearing on Tuesday‚ Murray & Roberts’ third expert witness‚ Ric Snowden‚ said that based on the drawings he had seen‚ if he were a designer of the temporary works structure‚ he would have re-designed the structure taking into account that the standalone structure erected by Murray & Roberts was not as per the drawings.

Snowden testified on the importance of sequencing further emphasising the issue of adequate bracing‚ saying this was critical in all phases of the work. He said had bracing been done adequately‚ the temporary works structure would not have collapsed.

“Although I was made aware of the deviations in the construction of the structure‚ this was a matter between Murray & Roberts and FormScaff‚” he said.

Snowden said while there was a misalignment of the girders in the centre median‚ there could have been immense pressure on Murray & Roberts to open the road. He further told the Commission that although the construction was ahead of schedule‚ there were a number of dates that were revised.

According to Snowden‚ he said he had interrogated the drawings of the project and a lot of information was missing. He further told the Commission if he were constructing the project using the same drawings‚ safety would have been compromised. He identified that the drawings were not signed off by a professional engineer.