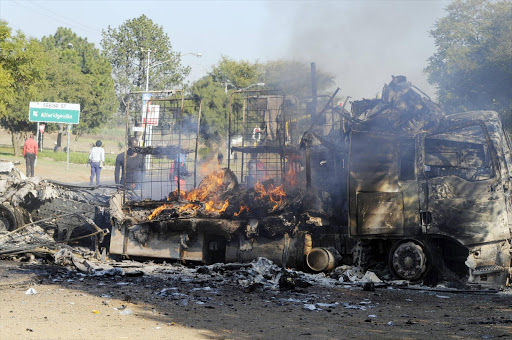 June 21, 2016.Delivery truck was burned during the protest in Atteridgeville, West, Pretoria.PHOTO:PETER MOGAKI

If your personal property was destroyed in the Tshwane protests this week‚ or other violent community protests flaring up ahead of the municipal elections‚ can you be compensated?

You may be able to claim damages from SA’s state-owned South African Special Risks Insurance Association (Sasria) – but only through an existing insurance policy.

So‚ what is Sasria and how does it work?

According to commercial law expert Matthew Morrison‚ insurers generally will not cover this type of damage themselves but will add cover from Sasria onto your policy.

“Sasria does not sell its products to the end-customer but rather it enters into agreements with other short-term insurance companies who then represent and sell Sasria’s products‚” he said.

But if no conventional insurance is in place‚ there can be no Sasria cover.

Sasria said that many consumers do not realise is that this kind of special cover against strikes‚ riots‚ civil commotion and terrorism is not automatically included in standard building‚ vehicle and valuables insurance policies.

It is an optional add-on‚ it said.

To make sure you are covered‚ give your insurance broker a call.

Dialdirect’s Bianca de Beer said that Sasria is normally automatically included in your car insurance policy‚ if your vehicle is financed. After the vehicle has been paid off‚ your Sasria cover should continue as long as your insurance policy does‚ she said.

Sasria said on Wednesday that it has seen an increase in claims related to protests and strikes in the first half of the year‚ as well as an increase in the severity of these claims.

In February Sasria had processed 188 claims to the value of R92-million related to student protests alone.

According to the Institute for Security Studies’ public violence monitoring project‚ 53% of the 2‚880 protests it recorded between 2013 and 2015 were violent.