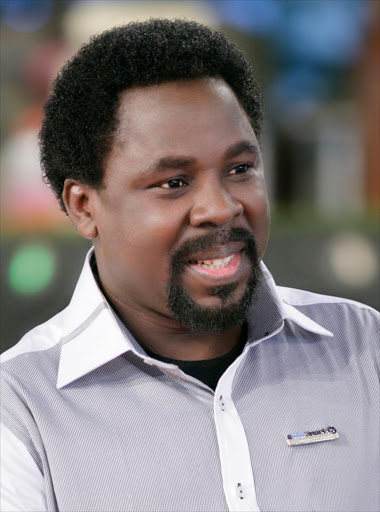 7. T.B. Joshua – Net worth: $15 Million (Nigeria) He is the leader and founder of the The Synagogue, Church of All Nations (SCOAN), which runs a Christian television station called Emmanuel TV. He became the centre of a controversial topic when his church collapsed in Nigeria and killed over 80 people. The Pastor has remained controversial for several years for his inexplicable powers to heal all sorts of incurable diseases, including HIV/AIDS, cancer and paralysis. in 2014 he was living in a $1.7 million mansion.

The family of one of the victims of TB Joshua’s Nigerian church collapse say they want to see the culprits held to account for the tragedy.

A total of 116 followers died in Lagos in September 2014 when a guesthouse at the Synagogue Church of All Nations collapsed.

In July last year‚ the coroner’s inquest found that the collapse was a result of negligence.

Oladele Ogundeji and Akinbela Fatiregun‚ the two engineers who were involved in the construction of the building‚ alongside their companies Hardrock Construction and Engineering Company and Jandy Trust Limited‚ face charges of involuntary manslaughter. They face 111 counts in a trial that started on Wednesday.

“We would like to see the culprits being brought to book and that this matter should not be buried with the mortal remains of our relatives who perished in that tragedy.

“We also believe that nothing will ever bring back the lives of our relatives but we cannot encourage a culture of immunity. That’s why we want the culprits to be prosecuted and we can’t rule out the possibility of a civil lawsuit against anyone who will be found guilty of that incident‚” Green said.

The family of another of the victims of the church collapse is suing Joshua for R18-million. They opened the case in the High Court in Lagos‚ claiming that the church and its leader were negligent.

Joshua repeatedly refused to give evidence at an earlier coroner’s inquest‚ despite multiple court summonses. He suggested the collapse was caused by a mysterious “hovering” aircraft seen over the building before the tragedy.