SEE: Motorist ends up under truck - and survives 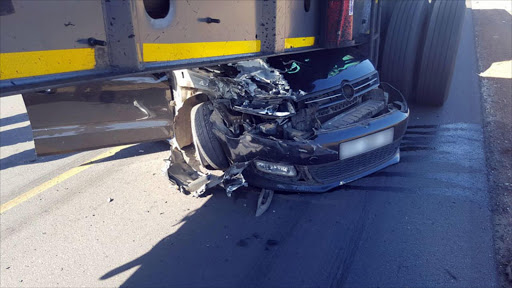 A woman motorist who swerved into oncoming traffic to avoid a broken down vehicle in her lane had a near miraculous escape on Monday‚ when she survived her car being crushed under a truck.

ER24 paramedics were called out to the Vandyksdrift Road in Witank‚ Mpumalanga.

The front of her car was found crushed under the back of the truck.

“ER24 paramedics assessed the light motor vehicle driver‚ who was found walking around the scene‚ and were relieved to find that she had escaped serious injury.

“The woman declined transportation to hospital and told paramedics she would visit her doctor.

“The driver of the truck was assessed and found to have escaped injury.”

Local authorities were on scene for further investigations.

ER24 said it was believed that the truck crashed into her vehicle. She had swerved into oncoming traffic to avoid a broken down vehicle in her lane.