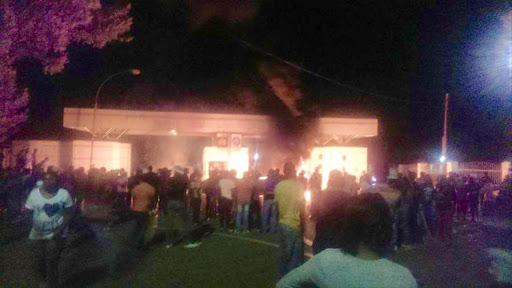 Students at the Fort Hare campus in Alice went on a rampage on Wednesday night and burnt tyres outside the campus after they claimed management had failed to meet their demands.

One of the main demands was that students who were not resident on campus must receive their accommodation and transport allowance before the end of the first semester.

Another demand was that all first year students who applied and qualified for NSFAS funding must sign the loan agreement forms today.

The protest comes less than two days before the university hosts a centenary celebration‚ which President Jacob Zuma is expected to attend.

The university’s vice chancellor‚ Dr Mvuyo Tom‚ confirmed that students were burning tyres on the streets outside the Alice campus.

Tom said in an interview with Power987 News on Wednesday evening that the students went on a rampage before even receiving the report from the meeting between student representatives and management.

However‚ Yusuf Cassim‚ leader of the Democratic Alliance student organisation (DASO)‚ said the tent where the celebrations were supposed to take place had been burnt down.

“Our SRC members have tried to prevent this from taking place without success. Students are very angry‚” Cassim told Times Media Digital on Wednesday evening.

Cassim said DASO did not condone the damage to property.

“I condemn burning. Solves nothing. Tom& Blade are responsible as well. It’s May and students still not funded or eating or have textbooks‚” Cassim said in a Facebook post‚ referring to the vice chancellor and Higher Education Minister Blade Nzimande.

“Fort Hare is not on Blade’s capture list. He doesn’t care if it burns. We have been warning him for years and he has done squat‚” Cassim posted on Facebook.

In a statement earlier‚ Cassim said the process regarding debt clearance and financial aid for students at the University was shut down this week.

According to the Financial Aid department at Fort Hare‚ the agreements could not be signed due to university funds having been exhausted‚ he said.

“This will leave poor students without the funding that they were promised and again highlights the chronic lack of funding in higher education‚ and in particular‚ the poor financial management of this historic university.”

South Africans shared both pride and dismay at the protest-related damage.

“From the ashes of South Africa‚ we shall build Azania‚” said I am An African ?@Uncle–JayB‚ who shared photos of the scene.

“And our VC is saying the centenary celebrations will go on smoothly‚ it has just started #FortHare‚” said Hlihle ?@MihleSokupa.

Olwethu Sipuka ?@osipuka had a mind for the history of the institution‚ tweeting: “I pray they don’t burn the priceless Nelson Mandela manuscripts at #FortHare”.

Many more shared concern at the damage being done to educational institutions.

Anisa Mazimpaka posted on Facebook: “Wits VUT UJ and now Limpopo College & University of Fort Hare who’s next?! Our Institutions of higher learning are being burnt??!! What’s hapenning in SA?! No man”.

Chief Nxamalala ?@Nkosinathi–7 tweeted: “The law enforcement agencies are busy with political agendas while the country’s future burns to the ground by thuggish maniacs #FortHare”

As some students threatened to disrupt President Jacob Zuma’s centenary speech on Friday‚ BraMoremzee ?@morembula tagged the ruling party and commented “@MYANC the students dont want Jacob‚ recall him and all will be wll. #FortHare”.

Tsodiyo ?@tokelonhlapo posted: “Fort Hare students say they will disrupt Zuma from speaking‚ only Mugabe will speak because Bob is a graduate.”

In Parliament on Wednesday‚ Connie September‚ the newly elected chairperson of the Portfolio Committee on Higher Education and Training‚ voiced concern about the ongoing burning of education infrastructure throughout the country.

She said burning university buildings and schools is deplorable and leads the country nowhere.

September described it as acts of crime and said: “As the Committee‚ we are calling for those tasked with ensuring safety at universities to be unwavering in their responsibility.”

MPs in the portfolio committee supported the call by the Department that arsonists should be found speedily and dealt with‚ she added.

On Tuesday‚ protesters gathered at the Alice student centre to hand over a memorandum to management‚ demanding the release of funds for meal allowances amongst other issues. Sharing a photograph of the protest‚ the EFF student branch used the hashtag #CentenaryMustBurn”.