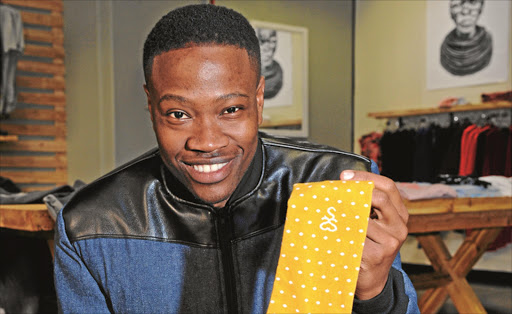 Whilst brainstorming with his team, Ngwenya expressed this sentiment and 2 weeks later a woman tagged him on a picture of Michelle and Barack Obama and stated ‘I can’t wait for the day Obama wears your socks’

Ngwenya who mentioned that the likes of Black Coffee, Laduma Ngxokolo and Trevor Noah inspire him realised that he would like Noah to wear his socks. But how to get his socks to Noah? A well-meaning friend suggested that he should just tag Trevor Noah on social media and the people would carry the message on from there.

After the campaign gained momentum Ngwenya realized that there was more to it than just getting his socks to Trevor Noah.

He wanted to show young people that they could be utilizing social media for more than just trolling and selfies.

“I looked at the journey of Skinny Sbu socks for the past three years, it’s a brand that was built on social media, and I wanted to show kids on the street that you don’t necessarily need all these big major things and funding to start a brand.

You can actually switch on your phone, create a logo, put it on social media and get people talking.

You don’t know who’s looking, it might be an investor or potential client.”

Ngwenya hopes by the end of May Trevor would have seen the campaign and would hopefully be wearing his socks. He also hopes that this will help him get a global foothold, having missed his opportunity to capitalize on intercontinental coverage when the business was younger.

“Six months after starting Skinny Sbu socks my story was blasted across the world on CNN, in  China, Abu Dhabi, Lagos, New York ,everybody knew about the brand. If I was this smart back then Skinny Sbu  would be three times bigger than it is right now. But I'm not going to live in the past, I’m going to create my own opportunities,” he said

Ngwenya told SowetanLIVE that he’s getting ready to launch a women's range. He realised that although the product is aimed at men, it is women that are buying the socks for the males in their lives.

The women’s range is for Summer 2016, Ngwenya would only tell us that he is working with a ‘very popular’ female South African 'artist'.

“It’s one exciting collaboration, everybody is talking about this person currently, it’s crazy. This person characterizes what Skinny Sbu stands for, talent, street smarts, fashionable, upmarket everything that we are this artist has,” he stated.

"The collection is inspired by this artist who has ‘been in the industry forever’. The range will be designed for her and she will be a part of the process every step of the way. She will be making calls on which colours should go with which , amongst other things on the range."

"It’s a very exciting partnership for women specifically and it’s about time. "