Rocks rain down in Grabouw protest 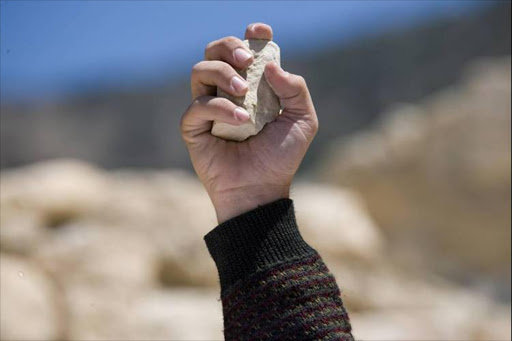 It was the sound of rocks smashing relentlessly into his car that startled Aphiwe Deklerk.

Hundreds of protesters‚ venting their fury at being evicted from land owned by the department of Public Works‚ engaged in running battles with police in the town of Grabouw about 70km outside Cape Town on Wednesday.

Violence flared for a second day as people took to the streets‚ many armed with sticks‚ machetes‚ and rocks. They erected burning barricades and hurled rocks at armoured police Nyalas. Police responded with rubber bullets and tear gas and arrested at least 15 people.

Deklerk‚ a journalist at TMG Digital‚ was attacked as he drove through heavy smoke near to the town.

“I was on the N2 close to one of the entrances to Grabouw when I saw youths‚ about 10‚ pelting the front of the car with rocks. Then there were about seven of them hitting the car from the back. More of them came at the car. They were hiding between bushes and the rocks‚’’ he said.

The highway remained closed on Wednesday due to the volatile situation.

Residents of an informal settlement‚ called Siyanyanzela‚ allegedly set fire to the local traffic department offices on Tuesday after an anti-land invasion unit and police started demolishing as many as 1‚000 structures on the open plot of land.

The land belongs to the department of Public Works. They called on municipal authorities to provide housing and toilets.

GroundUp reported that Nomisisi Dlathu‚ a community leader an interim secretary of the Ses’khona Peoples’ Rights Movement‚ said the protesters were demanding proper houses and those who did not qualify‚ wanted services such as water sanitation and electricity.

Theewaterskloof municipality spokesman Stiffie Cronje said that the contents of the traffic services building had been looted. Early estimates put the damage at more than R2 million but the final figure still had to be calculated‚ he said.

Municipal manager Stan Wallace said there was “huge sympathy with people who live in terrible conditions and … are desperate to find a place they can call home.”

However‚ the illegal land invasion on property belonging to the national department of Public Works could not be condoned by the municipality.

“In situations like this it is not just about the provision of land. At least 1‚000 structures have already been established in a matter of two weeks or are in a process of construction‚” he said.

“This is like the establishment of an additional town in our area which all of sudden needs to be provided with services‚ infra-structure and bulk services for which no provision has been made in our budget or longer term financial planning.”

Teachers and school pupils were unable to attend class. Western Cape MEC for education Debbie Schfer‚ said that three high schools and two primary schools had been affected by the protests on Tuesday.

“I am acutely aware that it is election season and I plead with parents in the various communities to be mindful of the fact that their children are the only victims when we are forced to close schools due to violent protest action‚” she said.