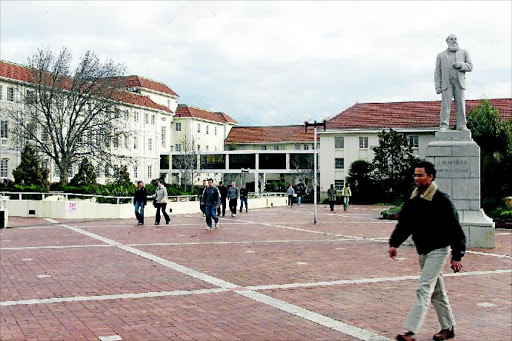 Stellenbosch University has conceded to students' demands to remove Afrikaans as the medium of instruction.

Last year, Open Stellenbosch, a group of students, protested over the  use of Afrikaans as the medium of instruction.

The students were calling for the use of English as its medium of instruction but its council rejected the proposal.

In its first draft, the university's new proposed language policy said it was prepared to advance multilingualism by placing emphasises on the three of the most spoken languages in Western Cape - English, Xhosa and Afrikaans - at undergraduate level.

"Emphasis is placed on inclusivity, diversity and the effective construction of knowledge which implies that a specific language may not be used to exclude students, staff or other stakeholders," reads the language policy.

The proposed language policy states that Afrikaans and English are the university's learning and teaching languages.

It further says that for undergraduate modules up to and including third year, Afrikaans and English will be applied.

"For modules where it is reasonable (in terms of enrolment, resources and staff) and where it is pedagogically sound to divide the students in more than one class group, parallel medium teaching is used with lectures in Afrikaans and English for different class groups.

"However, to prevent language isolation and to foster tolerance and respect, care is taken by the lecturer(s) to provide opportunities for students from the two language groups to meet and communicate across languages in academic settings," reads the policy.

"In all other class groups that are not divided, dual medium teaching is used where all information is conveyed in English. Additional support is provided in Afrikaans and/or English in the lecture and/or during auxiliary, facilitated learning opportunities to assist students' understanding of the academic material.

"This will depend on the capabilities of the lecturers and teaching assistance. Real-time interpreting services from both English to Afrikaans and Afrikaans to English can be offered to students - especially in the initial study years."

Podcasts and vodcasts of lectures would be made available in Afrikaans, English and, in some cases, Xhosa .

The university insisted it "remains committed to maintaining the status of Afrikaans for academic, administrative and communication purposes ".

Stakeholders were provided with the proposed language policy on Tuesday and have 30 days to make submissions.

Other former Afrikaans universities ( Pretoria and Free State) faced pressure from protesting students demanding that Afrikaans be scrapped with the latter giving in to the demands.

Stellenbosch University hopes to implement the new language policy from January or "as soon as possible". Member of Open Stellenbosch Jodi Williams said the movement would only meet next week and it is then that they would say what their stance is regarding the proposed language policy.

The university declined to comment until "the process has been concluded."