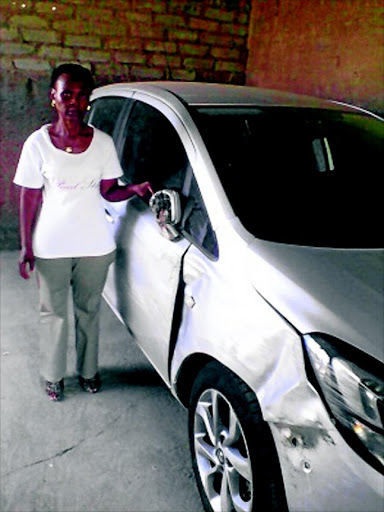 NO COVER: Morakane Ramarumo her claim was rejected after her car was damaged in an accident

Be warned! Prime Motor CoverGROW cover - an insurance product which Prime Meridian Direct sell to consumers - does not offer a comprehensive cover as advertised on television.

In other words, it is not a traditional comprehensive motor insurance policy that will pay a full amount for a written off vehicle or repairs following an accident.

It only pays an equivalent amount of the premiums a consumer paid towards his or her cover, Consumer Line has discovered.

In fact, Prime Meridian only entertains claims if they had received at least six premiums and photos of the consumer's car to validate the contract.

This explains why Prime Meridian rejected Morakane Ramarumo's claim after her car was damaged in an accident two months ago.

Last Monday Consumer Line published an article in which we highlighted Ramarumo's plight.

Ramarumo bought a car in August last year and had it insured with another insurance company for a month before she switched to Prime Meridian.

Five months after signing up Ramarumo had an accident and her claim was rejected on the grounds that she did not supply the company with five photos of her car.

At the time of publication last Monday, Prime Meridian had offered to respond after they had thoroughly investigated her matter.

lHellopeter.com, a portal which allows consumers to complain and criticise any supplier of bad service, has about 366 complaints against this insurance company and only 66 of them are happy.

Most of them complain about delays in processing claims paying panelbeaters while others complain about rejection of claims based on non-supply of photos.